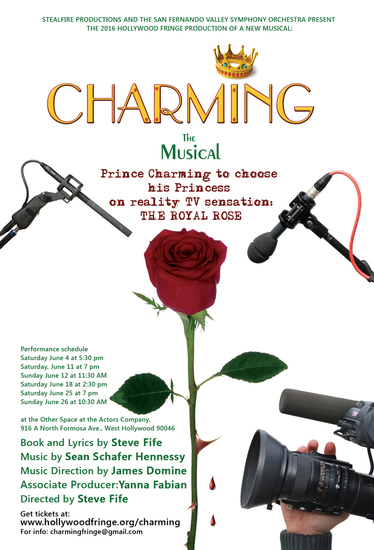 Prince Charming is in a pickle. Just as he was about to leave for a dragon-hunt with his “best dude” Prince Guy, he is informed by his dad (King Darling) that the Kingdom of Charm is bankrupt. If Charming doesn’t find a way out, the creditors will repossess everything. “I’ve saved many damsels – now who will save me?” Prince Charming cries out.

No sooner is the cry for help out of his mouth than Morgana the Witch appears in a puff of smoke. She informs the Prince that she’s the producer of a reality TV show called The Royal Rose – “we’re number one, baby” – in which each season is devoted to a Prince’s choosing his royal mate from among a bevy of beauties. Charming agrees to be this season’s royal bachelor, as long as he doesn’t actually have to go through with the wedding. (Morgana assures him he doesn’t.)
We (the audience) soon find out that Morgana has ulterior motives. As a part of her plot, she has rounded up damsels with a grudge against Charming to be his dating pool. Sleeping Beauty, Rapunzel, the Frog Princess, Cinderella, Snow White – all have been left at the altar by Charming, who simply lost interest after saving them.

The Prince is completely unaware that any plot is afoot. He doesn’t even recognize all these damsels that he saved, though he does wonder why their faces seem somehow familiar.

There is also a family of Charming villagers (the Dunghills) whose fates are tied to that of the Prince, though he doesn’t know what to do when their lives start falling apart as the kingdom veers into bankruptcy.

Everything converges on the TV studio where the Prince is about to hand out his Royal Rose to his Princess-To-Be. But what can the Prince do? Can he trust the emotion in his heart? And will this be enough?

And will Red Riding Hood ever figure out why her grandma’s chin is so scratchy and her teeth are so sharp?

All will be resolved in the exciting conclusion to CHARMING – a new musical with 20 original songs that are sure to enchant, delight and put a smile on even the dourest faces.