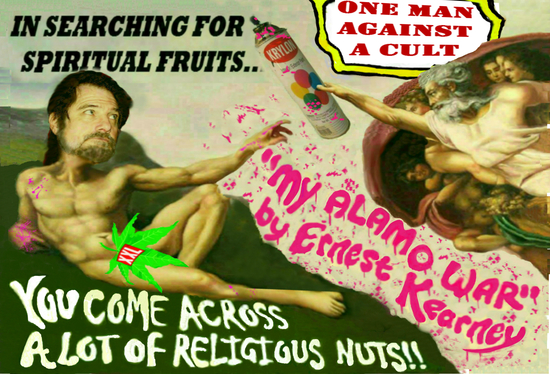 “IN SEARCHING FOR SPIRITUAL FRUITS –
YOU RUN ACROSS A LOT OF RELIGIOUS NUTS!!”

“MY ALAMO WAR”
Written and Performed by
Ernest Kearney

Once a war erupted on the streets of Hollywood
that would stretch across the city and beyond.
It was writer Ernest Kearney’s war. He fought in it. He declared it.
It began on a summer afternoon in 1981
with him simply picking up a pamphlet with the heading
“The Tony and Susan Alamo Christian Foundation….”
For the next two and a half years he fought a guerrilla war against an organization with a nationally televised ministry, that enslaved its followers,
while selling designer jackets to the elite of “Tinsel Town” and allegedly operating vicious scans.
This is the story of the Alamo War,
from its ludicrous beginnings to its shocking conclusion of madness and rape.

ONE MAN’S NARRATIVE ON THE NATURE OF WARFARE AND FAITH