Unleash Your Story: A PlayRompShop 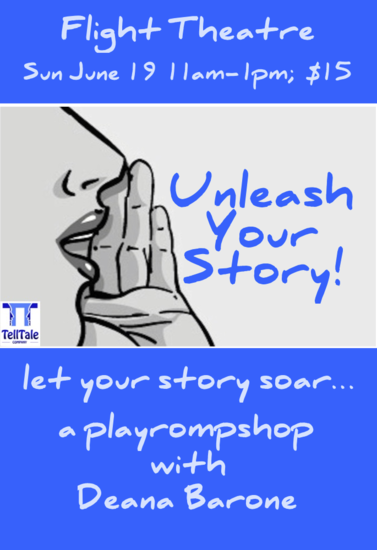 ..UNLEASH YOUR STORY!
…let your story flow and soar…

A two hour workshop to rev up your storytelling…includes warm ups, improv, writing prompts, and sharing your story with the group. Have fun, make mistakes and communicate!

Who is this for? People interested in solo performance, memoir, essay and self-discovery are all welcome. All styles of storytelling encouraged.

DEANA BARONE (workshop leader), is a solo performance artist, actress, clown, storyteller, director, producer, dramaturg and runs The TellTale Company. (dammit that was a long list) Her show, “MetaFam” will be at the Fringe Fest 2016, after workshopping at SoloFest 2016 at the Whitefire Theatre. She has directed three solo shows: “32JJ” by Joan Afton (also at Fringe 2016), “Mom, Dad, I have ADHD and other Ways to Disappoint the Indian Family” by Rasika Mathur (also at Fringe 2016), and “Duck Ugly” by Claire Thomasina J (which premiered at the Santa Monica Playhouse). She created The Trunk Show (The former Elephant Theatre’s monthly multi-genre storytelling show) and was the workshop leader and a co-producer for the LA Annual Storytelling Festival. Deana tells stories all around LA, is a Moth StorySlam winner, a produced playwright, and is in pre-production on a TV series she co-created with Dan Finkel. She has directed and dramaturged over 150 pieces short pieces (10-30 minutes). She coaches acting and storytelling privately, edits novels and is collaborating on “The Fifth Dance,” a psychedelic fairytale with a mind-blowing set. She has been featured as a clown/performance artist at “Highways Performance Space,” and is a guest artist/educator at UC Santa Barbara and Cal State LA in creative writing and performance. She also does pitch coaching for business innovator types (“Sell/Tell From Your Heart”), including DirectTV, and creates web content for small businesses like Righteous Joe and charities like FemCare.

ANN RANDOLPH, award winning solo performer and Deana’s mentor who started her on this path, is the world-renowned “Writing your Life” teacher who has provided this testimonial:
“Deana is an extraordinary writer and performer. Her talents as a performing artist are breathtaking. She is also incredibly gifted at giving feedback, and has deep wisdom and insight into what make a piece work for the stage and the page.”