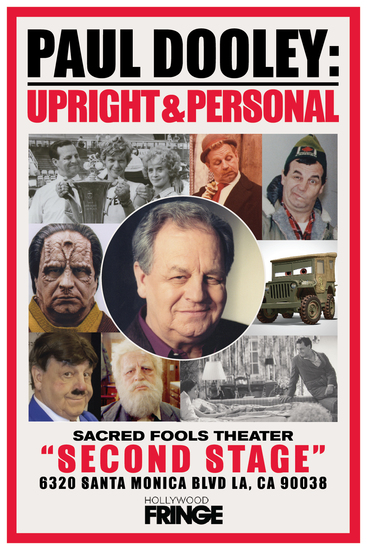 What’s it about? Well, it’s about 90 minutes. In this hilarious and revealing one-man-show, veteran character actor Paul Dooley invites the audience along on his journey from small town to silver screen, interweaving elements of vaudeville, silent film, clowning, and stand-up. This evening is a testament to Dooley’s lifelong love of comedy and a tour through his multifaceted career spanning more than six decades.

Over the years he has worn many hats, from Second City to Broadway to Hollywood, and even as the creator of TV’s The Electric Company. Most of all, he’s known for playing sometimes-cranky but always-caring fathers to stars like Julia Roberts, Molly Ringwald, Toni Collette, Philip Seymour Hoffman, and more. By turns laugh-out-loud funny and deeply insightful, Paul Dooley: Upright and Personal explores the curious ways life imitates art… and vice versa.