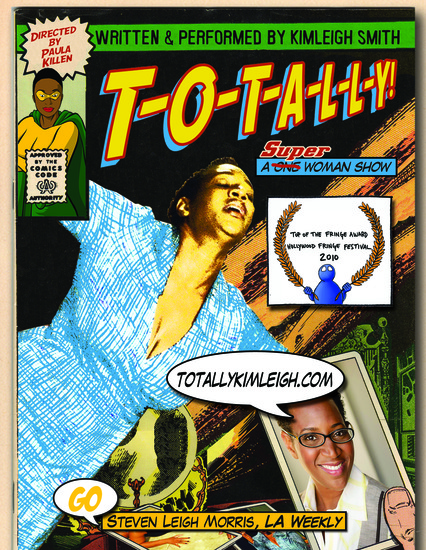 “T-O-T-A-L-L-Y , winner of the Top of the Fringe Award as well as Fringe Award for Theatre, got the early buzz and packed Theatre of NOTE at most performances. As candidly written and performed by Kimleigh Smith, it is a powerful journey from naïve teenage cheerleader to a woman of inner strength, told with brave honesty and athletic agility. It was crystal-clear why her honed talent drew audiences like a magnet, under the expert direction of Paula Killen. A future home is being sought to continue Smith’s totally engrossing story”. – Lee Mellville

PLEASE GET YOUR TICKETS NOW!

In this powerful one hour theater piece, Kimleigh Smith takes the audience through a journey that is totally uplifting, totally heartbreaking, and totally powerful.

T-O-T-A-L-L-Y! is the ultimate cheer. It will have you howling in your seats in hysteria and clutching your heart. Kimleigh inspires audiences through her hilarious and honest story to embrace their inner superheroes and find the strength to move forward no matter what. The cheer “That’s Okay, That’s Allright…get back up and Fight, Fight, Fight!” has an entirely different meaning once you see T-O-T-A-L-L-Y.

The audience witnesses the young cheerleader transforming into a powerful woman who reclaims her sexuality and lives as a whole, healthy, woman who cheers for life!

“A fearless performance, and one you don’t want to miss. All I can say is “w-o-w, WOW!”
- Mary Frances Emmons, Orlando Sentinel

“T-O-T-A-L-L-Y! is one of the most impressive performances I have ever seen and is the only one that has gained my attention so much that I have put many of my own projects on hold to promote it. T-O-T-A-L-L-Y! is a must see! You cannot miss this.”
– Angela Shelton