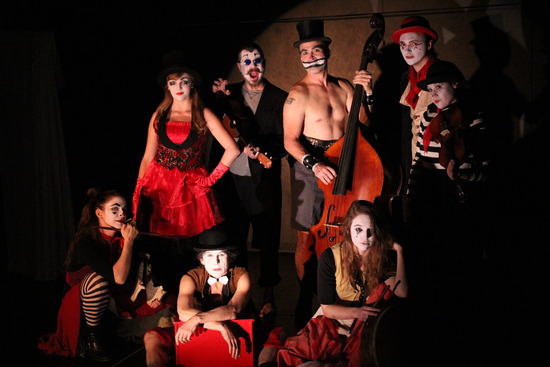 “It may be worth seeing La La La Strada more than once to fully appreciate the extent of its artistry. The cumulative impact of the ensemble is quite seamless; together the actors weave a total — and totally bizarre — world.” – Charles Donelan, Santa Barbara Independent.

La La La Strada, Proboscis Theater Company’s second ground-breaking production, is a carnival-esque diversion starring six actors, a musician and a puppet. Join us as we explore the making of Federico Fellini’s 1953 masterpiece La Strada, a beautiful and heartbreaking film about a brutish circus strong man and his naive assistant Gelsomina.

La Strada is one of the most beloved films of the twentieth century and Fellini is one of the most enigmatic and celebrated artists of all time. The character of Fellini will be portrayed by a Bunraku style puppet. We see him first walking the tight rope, beguiling the audience with fantastical stories about his life, his art and the golden age of modernist Italian cinema. He extolls the virtues of being an auteur and takes for granted the privileges of his own genius. He boasts about reducing his actors to mere puppets and how they love him for it.

But while he attempts to direct his actors they begin to challenge him. Especially Giulietta, his wife. They question his artistic process and admonish him for abandoning his principles. They call him a misogynist, an opportunist and he is forced to defend his obsessions and his right to project his own dreams on the big screen, to objectify and sexualize his female actors, to exalt the grotesque and estrange the normal. As Fellini’s crisis comes to a climax, the audience must face their own prejudices about art, beauty and personal expression. Will Fellini be destroyed by his own decadence or will his creative DNA live forever in a magical double-helix of celluloid and images? However the story ends, the audience will surely have an unforgettable theatrical experience!

Go to this url to read the Santa Barbara Independent review- http://www.independent.com/news/2015/feb/26/review-emla-la-la-stradaem-center-stage-theater-/