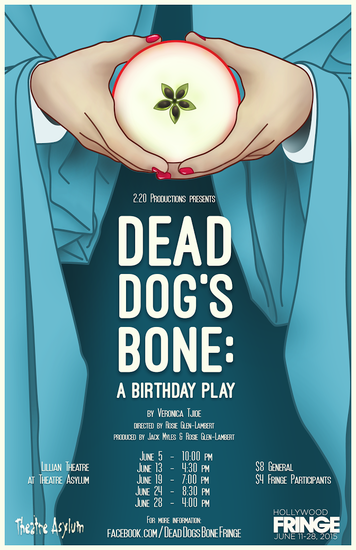 Written by Dharma Grace Award winning playwright Veronica Tjioe, “Dead Dog’s Bone: A Birthday Play” is a one-act dramatic comedy about the awkwardness of birthdays, letting go of things you love, and the horror of plastic Christmas trees.

The play follows Juniper, a pensive twenty-something as she struggles with an inherited inability to commit—a quality passed on to her from Iris, her free-spirited but absent mother. The play’s characters, which include Juniper’s good-hearted fisherman father and love-stricken corduroy-wearing boyfriend, must come to terms with the fate of the family dog which, as one might infer from the show’s title, is less than promising. The play transcends time and space, with events weaving in and out of the present, narrated by a boisterous, omnipotent, cut-the-shit reimagining of the Virgin Mary. Upbeat and clever, touching but never without a sense of humor, “Dead Dog’s Bone” manages to ask questions about growing up and the quest for happiness without losing sight of the silliness present in all of life’s most trying moments.