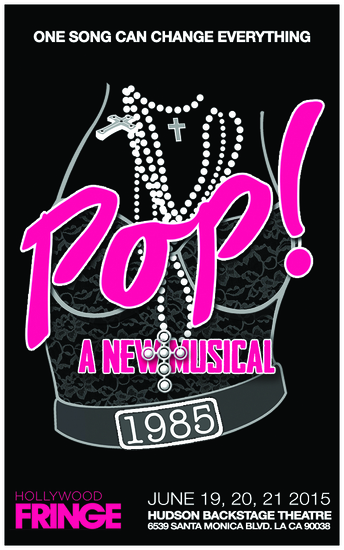 It’s 1985. Madonna is looking for one last song for her new album, and our band of musical misfits and whiz kids are all chasing that career-making cover…when they’re not too busy chasing each other.

“POP!″ is a musical adventure story – a quest for two of the most elusive kinds of treasure: love and gold, or more specifically, a gold record. To succeed, our crew has to battle personal and professional demons that bar the way. Each must discover the mysterious power of imagination and one of life’s most fantastically magical truths – that with passion, perseverance and courage… dreams really can come true.

Our story begins… and we find that Madonna is one song shy of a new album. A young intern at the record label is determined to deliver that elusive hit and make a name for herself. As luck would have it, the only songwriters she knows are an over-the-hill rock ‘n roller and a folksinger two decades too late to the game. Each hangs on to his music career by his fingernails, so despite their distaste for pop music they reluctantly agree to give it a shot and join the Madonna quest. Along the way the three enlist the help of friends and lovers… one very large skeleton leaps out of a closet… and by the time the musical dust settles, all their lives are changed forever.