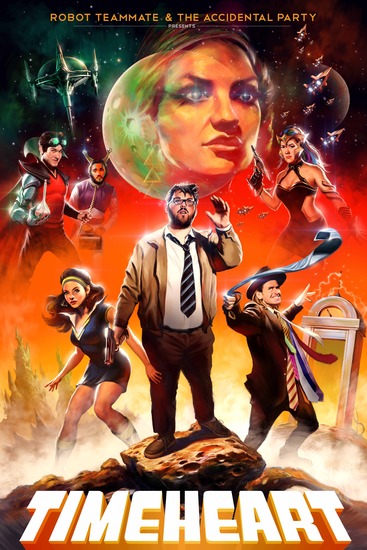 “The Fringe-iest of the Fringe” – Tony Frankel, Stage and Cinema

Acclaimed musical improv troupe, ROBOT TEAMMATE & THE ACCIDENTAL PARTY, premieres their original sci-fi musical comedy adventure, TIMEHEART. Follow oddball inventor Bruce Greenstreet on his cosmic quest to correct the fallout from his time machine as he journeys to the fabled center of the universe: the Timeheart.

“Robot Teammate is always worth watching. Their storytelling is top class, their musical versatility is hugely impressive, and, above all, they are properly funny.” – Ewan Phillips, Producer, Whose Line is it Anyway

“To see their show is to see theatre explode into life before your eyes… if you get the chance to see them live, get that ticket and GO!” – Michele Greene, Tudor House Entertainment

Robot Teammate & The Accidental Party is an LA-based musical improv troupe which specializes in creating spontaneous full-length musicals based on audience suggestions. TIMEHEART is their first fully scripted musical. It was conceived during a sci-fi photo shoot in late 2013, outlined, improvised, recorded, written, then refined by the 8-person ensemble, who occupied all development and production aspects of the show up to its World Premier at HFF15.