The Dogs of War, Or, That's What Friends Are For 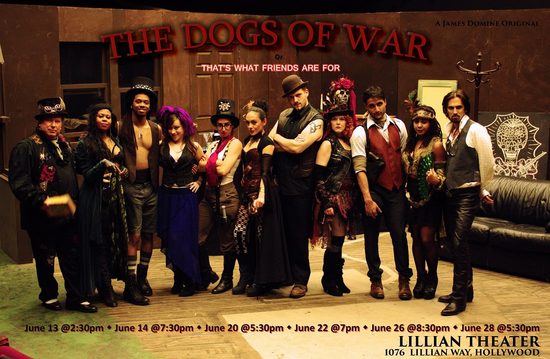 “The Dogs of War, Or, That’s What Friends Are For,” a play by James Domine, is a modern tale of gang warfare and romantic intrigue set in contemporary Los Angeles. Thematic threads of love and devotion, murder and revenge are woven together in a poetic tapestry that creates a mysterious and strange reality through imaginative and colorful use of language, at once philosophical and metaphoric.

The titular “Dogs of War” are a street gang, a motley band of profoundly dangerous individuals who lord over their corner of LA with swaggering impunity. When the play begins, they have just triumphed over their final rivals, and have no enemies left—except each other. There’s the malevolent, knife-wielding shyster lawyer Lucretia, and her colleague Doc, the perpetually stoned quack doctor, who provides prescriptions of all descriptions, none of them legal. There’s Heidi, the ruthless madam, who rules over her stable of call girls with an iron hand, and her clandestine boyfriend Chop, a mechanic turned car thief who’s fast on his feet, loose with his affections, and a frequent guest of the Corrections Department. There’s the brooding Officer Valdez, a crooked cop on the gang’s payroll, and at the center of them all the charismatic and fearsome Tyrone: the gang’s warlord, enforcer, and acknowledged leader.

At the margins of the gang, Heidi’s girls Anita, Felicia, and Salome ply their trade, while Tyrone’s spurned ex-girlfriend Nicole gets drunk on her hatred and dreams of a perfect revenge. And in the background of it all, seeming to be everywhere at once, flits the enigmatic Malverde, the grinning itinerant con man who may be more than he seems.

When the alluring Salome links up with Tyrone, Nicole’s jealous fury overflows, resulting in a shocking murder that will upend the fragile order of the gang, and send its members scurrying. Barely suppressed feuds, simmering jealousies, and latent ambitions all boil up to the surface, as the characters scramble for love, money, and their own better interests. Ferocious to his enemies and unfailingly loyal to his friends, Tyrone must do his best to discover which is which. Larger themes of trust and betrayal compel the story to its inevitable conclusion.

The play is cast in two acts: the first taking place in the crack house that serves as the gang’s lair, and the second unfolding all throughout the hood, from the gang members’ homes to a freeway overpass on a desolate street. The narrative unfolds as continuously evolving waves of rhyme in a rap poem that weaves its way through this urban drama.