THE FANTASTICKS - the original fringe musical (1959) 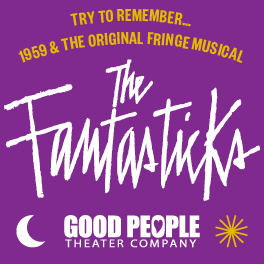 “…it feels like a game of make-believe. THE FANTASTICKS is just like the kind of teen-age love it depicts: nectar-sweet, exempt from time, and not nearly as simple as you may remember…” — The New Yorker

SCENE. It’s 1958. MY FAIR LADY owns the box office. Last year THE MUSIC MAN and WEST SIDE STORY both opened. Everything is big, bold, and over the top. And people are calling it the Golden Age of the American Musical.

Meanwhile, at Broadway’s fringe, two young men are trying to write a show. And they’re wondering: How can we compete with THAT?

So—smart students that they are—they “try to remember” the way theater used to be. Stock characters. Simple sets. Charming storytelling and vagabond rapier wit. They turn the slim comedic charm of the 18th century ROMANTICS into THE FANTASTICKS of 1959. And by doing so they accidently up-end the American musical, reinventing something so old, it’s shockingly new.

Join us for a pristine revival of this revolutionary classic. (We’re even using a harp like the original.) THE FANTASTICKS has all the things a good story needs: two scheming fathers, a boy and a girl in love, a silent trickster who commands the sun and the moon, a seductively handsome devil, and a pair of bungling “assistants” who are just dying to help.

Remind yourself why this little fringe musical defied the odds as a permanent resident Off-Broadway for more than 50 years, embodying the break-away spirit that begat many important musicals in the 1960s and 70s, and remaining beloved today.