Zombies from the Beyond 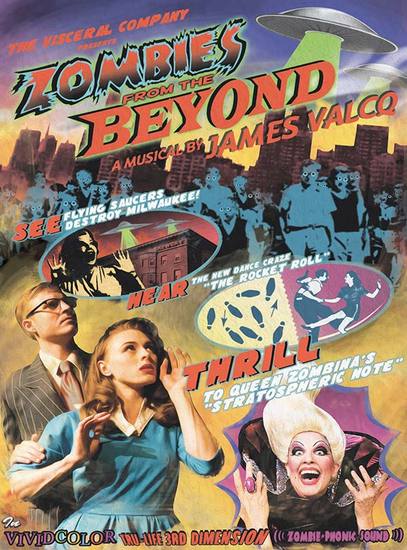 A musical comedy celebration of American ideals and foibles in the Eisenhower era. Songs, dances, and laughs abound in the unlikeliest of settings as the Cold War and space race paranoia threaten the good folks at the fictional Milwaukee Space Center in 1955, where the staff is all abuzz at the arrival of rocket scientist Trenton Corbett. The budding romance of Trenton and Mary—the daughter of Space Center commander Major Malone—is jeopardized when a flying saucer lands in Milwaukee. The craft is piloted by Zombina, a buxom alien aviatrix bent on procuring he-specimens to re-populate her planet. Can Mary uphold her lady-like demeanor while using her facile intelligence to save Milwaukee from a Red Menace and a flying saucer invasion? Can plucky delivery boy Billy ever get secretary Charlene to notice his tap-dancing charms?? Can the stalwart men of Milwaukee survive brainwashing by a musical menace from another world who gives new meaning to “stratospheric” soprano??? Taking its cue from pulp movies popular at the time, ZOMBIES FROM THE BEYOND brings the 1950s nostalgically and hilariously to life with a tuneful, toe-tapping score.

“Hilarious! Superb! Marvelous! Out of this world! A droll, tongue-in-cheek book and a zippy score. A dizzy musical above and beyond the call of hilarity.” — NY Daily News

“James Valcq’s book and songs are ten times cleverer than anything on Broadway right now. This is a scream, hoot and holler from A to Z and will probably turn up on many small theatres’ rosters thanks to its small set and cast.” — BackStage