(no static at all) 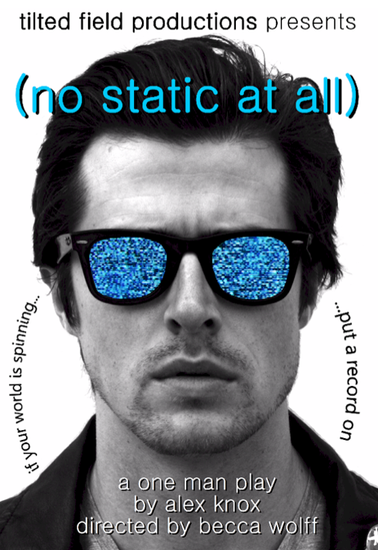 LA Examiner: "Alex Knox is a storyteller, plain and simple. This show is a work of art, especially if you love music… " (Bob Leggett)

Bitter Lemons: “Alex is a very charismatic, endearing actor and his quirky show is tight, simple and reads like an existential mystery… Probably the best one man show I’ve seen so far.” (Colin Mitchell)

Turnstyle News: “The effortlessly charming Alex Knox… sets the mood by spinning records through the show, timing his stories perfectly to the soundtrack… Knox is an engaging, dynamic, and heartfelt storyteller… Director Becca Wolff creates a perfect rhythm with Knox…” (Noah Nelson)

If your world is spinning… put a record on.

A man experiencing a crisis of faith becomes obsessed with the lives and music of an enigmatic rock band. Solo performer Alex Knox takes us on a highly personal journey of self-discovery with stops at untamed beaches on Kauai, sweaty recording studios in L.A., and a tiny town in Israel that hides an earthshaking relic.