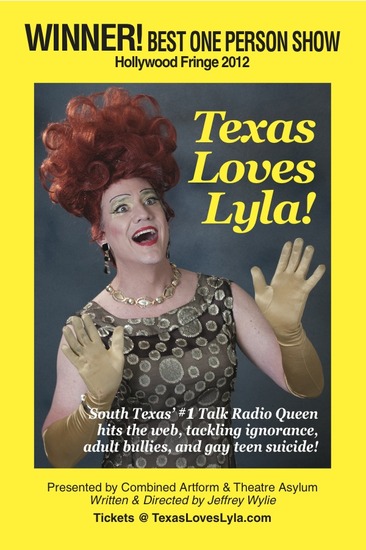 The radio call-in queen of south Texas, Lyla KaRug, is moving to the interweb! Join us for her inaugural streaming show as she tackles ignorance, adult bullies, and gay teen suicide in this heartfelt comedy/musical of drag-landish proportions.

“The hype doesn’t begin to cover this show! Don’t miss this gem of the Fringe.” -Bob Leggett, Examiner.com

“Wylie establishes himself as a master of milking laughs.”
-LA Weekly

“I forgot that was you up there!” Frances Wylie, Jeffrey’s Mom

FRINGE AUDIENCE REVIEWS
“Amazing. Funny and touching with a great message about bullying and growing up. This show is a must see!”

“There’s some serious heft at the core of Texas Loves Lyla… The delightful and corny bits support the rest, in no small part due to Jeffrey’s hilarious, warm and vivid presentation.”

“Wat a fun evening! Lyla is poignant and hysterically funny.”