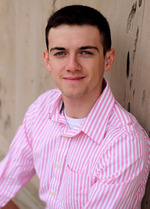 Dakota Dickerson (Ensemble) graduated from Pepperdine University with a degree in theatre and media production in May 2017 and is from Cape Cod, MA. He has been seen at Pepperdine as Michael in Heritage (2016), Chorus of the Dead in The Good Prisoner (2016), First Waiter in The Servant of Two Masters (2015), County Attorney in Trifles (2014), Boy in Woman’s Honor (2014), and Man in Goodnight, Don’t Be Afraid (2014). Dakota is a recipient of a theatre scholarship and the Impact Award for Reel Stories Film Festival (2015). He is a member of the Delta Tau Delta Fraternity, Iota Rho Chapter and is the Floor Director for Malibu Tonight. Dakota was a member of the Pepperdine Scotland Company that was awarded The Scotsman Fringe First and Broadway Baby Bobby for their production of The Interference.