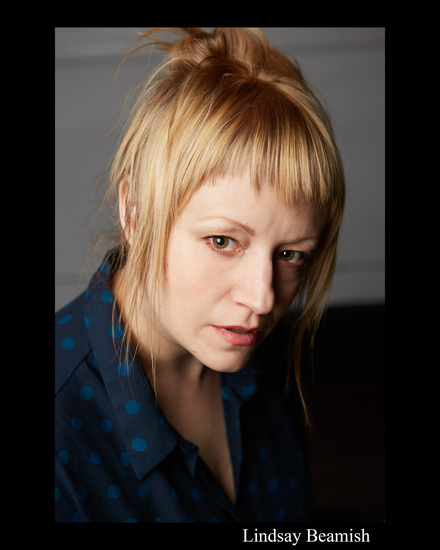 Lindsay Beamish has been a professional actress, writer, dancer and performance maker for over twenty years. She was most recently seen in the film Forgetting the Girl for which her performance received favorable reviews in The New York Times and Variety. Before that she appeared in the independent film The Greatest, starring Pierce Brosnan, Susan Sarandon, and Carey Mulligan, which premiered at Sundance Film Festival. Other film work includes John Cameron Mitchell’s Shortbus, which premiered at the Cannes Film Festival. Lindsay’s performance in Shortbus was notably reviewed by David Ansen in Newsweek and Tom Carrao in Film Monthly, was awarded the Lulu Award for Best Supporting Actress, and was nominated for a Gotham Award (NYC). She appeared with the film at the Cannes International Film Festival, Toronto International Film Festival, Chicago Film Festival, and the Bergen International Film Festival (Norway). Other film and television work includes performances on/in CSI, Gilmore Girls, Six Feet Under, The Pretender, Jimmy and Judy, Strong Medicine, and Miranda July’s seminal film Nest of Tens. Lindsay’s recent stage performances include Winter Solstice (Boston), Desire (Boston) Grapes of Wrath (CA), The Bacchae (CA), Flash (CA), and The Faust Projeckt (CA). Recent devising/directing work includes the multi-media full-length performance 38 1/2, as well as Wigs, which premiered at the NYC Fringe Festival in 2016, and enjoyed a sold-out run in 2017 at the Hollywood Fringe. It was selected as a “Best Bet” of the NYC Fringe and notably reviewed by theasy.com. Her film directing work includes the experimental short In Can Can Descent, which was nominated for Best Experimental Short at the South by Southwest Film Festival, and played at the NY and Chicago Underground Film Festivals. Her dance company, The Leg and Pants Dance Theeatre, toured with the acclaimed band Deerhoof, and performed at such venues/events as The Knitting Factory (NYC and LA), the Bowery Ballroom, Ladyfest San Francisco, and Arthur Ball Los Angeles. Recognition for Lindsay’s creative writing includes the 2011 Iron Horse Discovered Voices Award, and she was the Iron Horse nominee for the 2012 Pushcart Anthology. In her graduate studies at UC Davis, Lindsay received the Provost’s Fellowship for the Arts and The John Shields Award in Acting. Lindsay holds a BA in Theater Arts from UC Santa Cruz, an MFA in Creative Writing from the University of Wyoming, and an MFA in Dramatic Arts from UC Davis. She has taught acting at Oklahoma City University, The University of Wyoming, UC Davis, The New York Film Academy, The School of Cinema and Performing Arts (LA Campus), and is currently an Assistant Professor of Acting at Emerson College. Lindsay is a proud member of SAG/AFTRA.