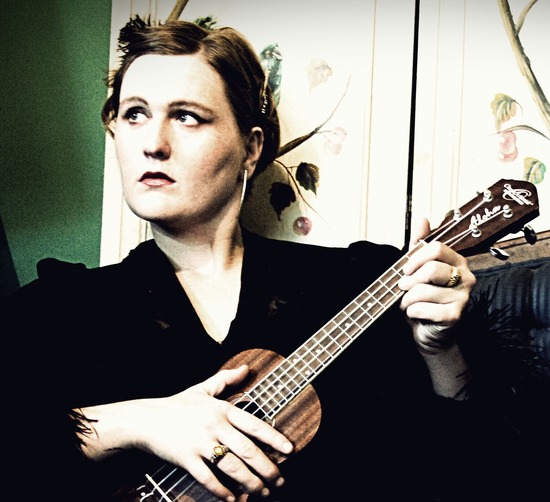 Liz Eldridge is an actor, writer, musician, and stand-up gal living in Highland Park. She graduated from Johns Hopkins University with a BA in Writing Seminars and Theatre Arts & Studies.

Liz grew up in Los Angeles with a series of great dogs. She started voice lessons when she was 10, eventually studying classical voice with Dr. Gary Busby, of UCLA, and later with Carol Cavey-Miles at the Peabody Conservatory, and began writing songs and short plays as a child.

At Hopkins she studied acting and directing with John Astin, who heads the Theatre department, with James Glossman, of the NJ Playwrights Theatre, and with Krista Smith, of NYC’s Visible Theatre. She took courses in Acting, Directing, Dramaturgy, Theatre History, and Theatre Management, and was lucky enough to study writing in workshops and seminars with her favorite novelist, Stephen Dixon. Following graduation, she produced and directed her adaptation of the poetry of Russell Edson, A Performance at Hog Theatre – A Vaudeville at the Annex Theater in Baltimore with an Arts Innovation Grant from Hopkins. Her sophomore year of college, she began working with the JHU Jail Tutorial Project, which provides GED training for incarcerated women in the Women’s Ward of the Baltimore City Jail, and by the next year she branched out into teaching her own Creative Writing and Journaling workshop in the Women’s Ward.

Since returning to LA, she has worked at the Geffen Playhouse in the Literary Department and in the Artistic Department of the Pasadena Playhouse. She had the lovely experience of working as the Assistant to Gil Cates, the Producing Director at the Geffen, before leaving to pursue her creative ambitions.

She is a company member of Theatricum Botanicum and The Kingsmen Shakespeare Company, is a student at the UCB, and has been lucky enough to act on many stages around LA, including originating the role of ‘She/Ukulele Lady’ in the world premiere of Charles Mee’s ‘Cafe Le Monde.’

She’s appeared in several independent films as well as TV shows, including the series finale of “Hannah Montana,” and the season 4 finale of “Shameless,” airing April 6th.

You can see her onstage at Theatricum Botanicum all summer long as Cornwall in their adaptation of King Lear. In her four seasons, she’s helped bring Shakespeare to hundreds of school kids from diverse backgrounds through the School Days program, and as an in-school Teaching Artist.

She sings the blues at venues such as the Gardenia and Cafe Metropol. With her band, “Many Distant Cities” she has performed her original alt-country tunes at Los Globos, Ham & Eggs, the Heritage Square Museum, Silverlake Lounge, the LA Theater Center, The Viper Room, and other great venues and backyards around town – including the top of Mt Wilson with the Outdoor Stage Project. Many Distant Cities are currently recording their second EP – look for it this summer!

She has four REALLY COOL pets: the dogs are, “Pickle,” and “Patty,” and the cats are, “Noodle,” and “Robocop.”