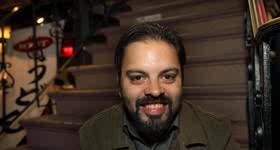 Juan Perez hails from New York City, having performed in theatrical and cinematic productions for over a decade. He has appeared in the New York and Los Angeles theatrical circuit, being featured prominently in stage productions of ‘A View from the Bridge,’ and ‘Escape from Happiness,’ before starring in ‘Wait until Dark.’ In Los Angeles, Juan starred at the Secret Rose Theatre in Kirk Arnold-Smith’s production of ‘Blind Date,’ a blindingly-fast verbal trapeze act. He also appeared in the Hollywood Fringe Festival 2011 production of ‘Pulp Shakespeare,’ which received several awards including ‘Best Theater’ in Los Angeles.

In film, he parlayed his memorable performance as “Bernardo” in ‘Jose’s Place,’ into the uniquely manic lead in ‘La Casa Loca.’ Most recently, Juan completed production for the upcoming film ‘8-Ball,’ featuring Paul Ben-Victor (The Wire; Entourage) and Johnny Williams (Goodfellas).

This past summer, Juan completed his NYC run of the LA hit show, ‘Pulp Shakespeare,’ as part of the NYC International Fringe Festival and Encore Series.

Juan is thrilled to return to the Hollywood Fringe Festival in the world-premiere of ‘Sunny Afternoon,’ which is written/directed by friend and colleague, Christian Levatino. ‘Sunny Afternoon,’ is a thought-provoking look into the critical 48 hours following President John F. Kennedy’s assassination.