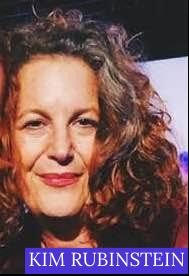 KIM RUBINSTEIN BIO
Before coming to UCSD to teach acting and directing at UCSanDiego Kim Rubinstein was the Long Wharf Theatre’s Associate Artistic Director where she directed Guys and Dolls, Midsummer Night’s Dream, Private Lives, Santaland Diaries, and The Cocktail Hour. Her production of O’Neill’s Anna Christie at The Odyssey Theatre won several Los Angeles theatre awards for best direction and production, as did her production of A Taste of Honey at the same theatre. Recent UCSD/La Jolla Playhouse productions include A Raisin in the Sun, How to Defend Yourself and Streamers. Other recent regional directing credits include: Venus in Fur (San Diego Rep); The American Plan and Savannah Disputation (The Old Globe); Romeo and Juliet and Much Ado About Nothing (Shakespeare Santa Cruz); The Intelligent Design of Jenny Chow (Portland Center Stage and San Jose Rep). In Chicago, she directed at Chicago Shakespeare Theatre, Next Theatre, Running with Scissors, Roadworks, She was Associate Director with Michael Mayer and Tour Director of the National Tour of Angels In America.

Professor Rubinstein’s other teaching credits include ten years on the acting/directing faculty at Northwestern University, as well as adjunct at University of Chicago, Brown/Trinity Consortium, Wesleyan University, NTI at The O’Neill Center and an ongoing teaching gig with the School at Steppenwolf. Ms. Rubinstein is a recipient of the TCG/NEA directing fellowship and was nominated for the Alan Schneider Directing Award, among other awards for her directing and teaching.

Professor Rubinstein has developed a systematic, embodied training synthesizing neuroscience with theatre techniques that stimulates and expands optimal creative thinking for people in all fields of endeavor. She has created and taught classes at UCSanDiego called Cultivating the Creative Mind, and has devised and taught a series of intensive four-day workshops for faculty, post-docs and graduate students on Communicating Science and Talking Research. She is also part of the Center of Empathy and Compassion’s Sanford Fellowship, which trains doctors to communicate effectively with their patients.