I Get Knocked Down... 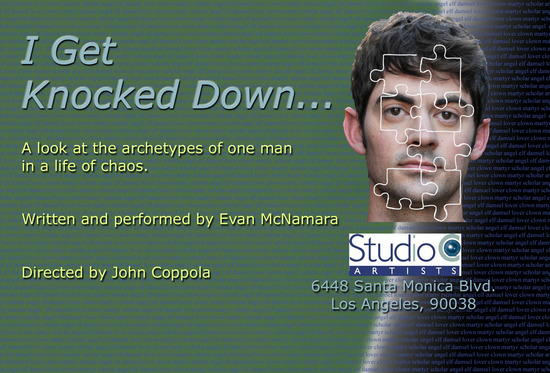 I Get Knocked Down … is one man’s journey across relationships and heartbreak, as told through the fragmented parts of his personality. Each fragment lends insight into how he was blinded by love, and ultimately blind-sided by betrayal and the dissolution of his marriage. Writer/performer Evan McNamara gives a tour-de-force performance as the father of two kids exploring the recent breakup of his home by delving into seven archetypes that are unique to his psyche. Evan’s journey within provides a deeper understanding of the meaning of unconditional love, and ultimately proves the power of self outshines even the darkest times.

Evan McNamara was born and raised in the suburbs of Philadelphia, where his career as an actor began in the third grade, playing the Pied Piper of Hamelin. Dreams of a professional acting career brought him to Los Angeles, where he has worked on stage, in film, and on television. Local theatre credits include Amadeus, You Can’t Take It With You, and The Shadow, among others. Television work includes The Soup, ER, Taprooting, Silence and The Last Bad Neighborhood. Evan has been a company member of ARTEL, Shakespeare by the Sea, and L.A. Troupe, and is presently a company member of Studio C Artists.

Director John Coppola was born into a filmmaking family in Brooklyn, New York, and has had a multifaceted career as a director, producer, actor and teacher. He began his acting career over 20 years ago while attending Yale’s prestigious Dramat Purple Crayon. He has appeared on Broadway numerous times (Brighton Beach Memoirs, Biloxi Blues, American Buffalo) and in films such as Into the Paradise, Last Exit to Brooklyn, Out of Gas on Lover’s Leap, and You Gotta Leave Your Mark. As a director, John has helmed over 25 theatrical productions in New York, Los Angeles, and abroad. The movie Possibility, which he directed, took the 2005 Grand Jury Prize for short film at the New York International Film and Video Festival. As part of Studio C, John offers unique private coaching to a thriving group of students, established actors, and movies stars.

Based in Los Angeles, Studio C Artists is a production, casting, and arts education company founded by director John Coppola and producer Michael Sonntag. The production unit focuses on film and television – primarily features, documentaries, scripted series, and web series. In addition, Studio C Artists develops projects for the stage, with the intention of working some of them into material for the screen. The Studio C Artists Acting & Filmmaking Institute is an all-encompassing acting studio, which offers a curriculum of acting classes, career-related seminars, and filmmaking workshops. The curriculum emphasizes The New Approach – a unique formula taught only at Studio C, which has been cultivated and perfected over the last 10 years. Studio C Artists’ clients range from up-and-coming actors to major film and television stars, and are represented by some of Hollywood’s busiest agents and managers. For more information, visit www.studiocartists.com. Studio C Artists is located at 6448 Santa Monica Boulevard, on Theatre Row, in Hollywood.