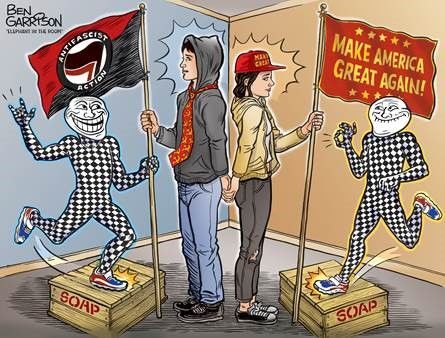 “Elephant in the Room” follows Kayla, a student at a college in Oregon, on her journey of political discovery amid the social-political turmoil of 2019. Four different outlooks are presented: Leftist-Liberal, White Nationalist, Antifa, and Trump MAGA.
When Donald Trump announces a forthcoming visit and speech at her college, Kayla is interested in becoming involved. She meets a cute boy, Bent, who encourages her interest, and persuades her to attend an “extremist” meetings. Activists there convince Kayla to attend Antifa meetings as an undercover spy.
At an Antifa meeting, she is surprised to see Bent, and realizes that she had misunderstood him. Kayla is confused, and looks further into the views of each side to decide who is right. Meanwhile, tensions between the two activist groups grow, and come to a head when Antifa militants try to topple a campus statue, “The Pioneer Mother,” and White Nationalists resist. Kayla finally picks a side in the clash of views.