Making Love Over There 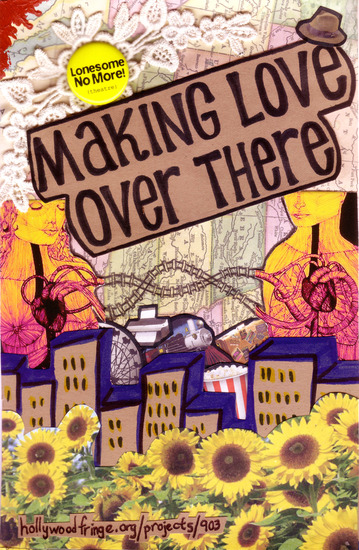 DUE TO ILLNESS, THE PERFORMANCES FOR BEST OF FRINGE HAVE BEEN CANCELLED.

“Reaches emotional heights with the skill of a well made mix-tape. The songs may not even all be in the same language, but they sure as hell feel right…a perfect theatre moment, perfectly performed.” -Turnstyle News

In our closets hang a thousand costumes and faces and we love to throw them on in the name of Love. With original music and the mad joy of dress-up, Making Love Over There is an attempt to rediscover Love and its lexicon. Together, actors Patrick Riley and Zoe Chao portray dozens of characters of varying ages and nationalities in different places, times, and states of mind, all of whom are searching in one way or another for the right words to be able to form a connection. This thematic series of snapshots creates a play collage straight out of Love’s family photo album. With its bold use of the entire theatrical space, live music, projections, and passionate exploration, Making Love Over There embodies the joyous spirit and “spark for theatricality” –(LA Weekly) that has come to characterize the work of Lonesome No More! Theatre.

Lonesome No More! Theatre, founded in January 2011, is an ensemble of creative producers and performers whose first production, Spring Awakening by Frank Wedekind, was named one of the “Best of Fringe” for the 2011 Hollywood Fringe Festival. Spring Awakening’s sold-out run received critical praise and several awards, Theatre Unleashed’s UNLEASHED Award (awarded to an ensemble production that has created “truly remarkable theatre with a fresh, thought-provoking approach to original or established works”) and was one of four productions nominated for the Best of Theatre Award out of over 100 submissions.