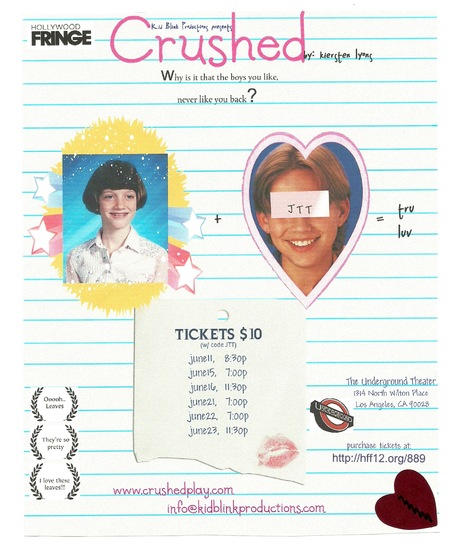 I think somebody (ok, its the press) has got a CRUSH:

❝…we laughed, cried, cringed and totally related to the tale. After all was said and done, I was so happy that Lyons had found her pot of gold. If anyone deserved it, she did. Despite the late hour, I left the theater energized and ready for anything. Kudos!❞ – (The Examiner)

❝Lyons makes the audience feel like she’s a long-lost girlfriend and we’re catching up on events that transpired since we parted ways at age six. She’s funny and affable and self-aware; she also did the amazing thing of making me remember the look on Marc Tetelle’s face when, in eighth grade, I told him I liked him and how Neal Barry and I kissed after the Sadie Hawkins dance (my first!) which led to his ignoring me for the next two years.❞ – (LAFPI)

❝Kiersten Lyons is funny and sweet. I like her. All of which is a win for us (and her husband Bradley) but a total loss for the boys she crushed on and got crushed by over the years. “Crushed” is her painfully funny one woman recollection of the timeless question which haunts many a lady in her youth, “Why is it the guys you like, never seem to like you back?❞ – (champagneandheels.com)

Whilst tying the bows on her wedding invitations, Kiersten’s male model fiance walks into the room, slumps in his vintage office chair, forlornly looks at his ironic New York subway system poster and sighs, “I don’t love you…”

Crushed is a comedic look at the question “why is it that the guys you like, never seem to like you back?” Grasping a timeline of crushes dating back to a Han Solo action figure, Kiersten uses what any good girl raised in the 80s and 90s would: an overhead projector and a handful of construction paper hearts she attempts to figure out crushes, heartbreak and why she had so many variations on a bowl haircut.