Poe and Mathews: a Misadventure in the Middle of Nowhere 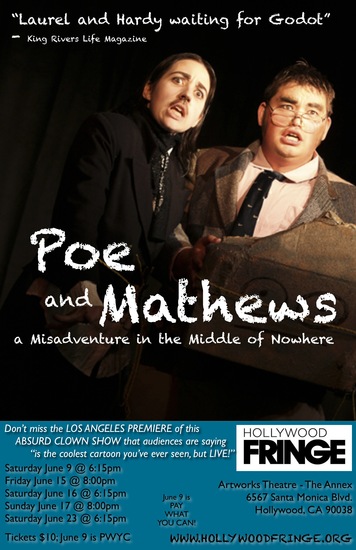 Poe and Mathews: a Misadventure in the Middle of Nowhere is a fast and zany comedy that has been described as “…Laurel and Hardy waiting for Godot.” (King Rivers Life Magazine) This show is a physical comedy that does not skimp on slapstick humor, literary references, or 80s pop music. Poe and Mathews are an unlikely duo. Edgar Allan Poe is an author, well known for his contribution to the horror genre. Cornelius Mathews is also a writer…but is not well known for anything. These two literary mammoths find themselves shipwrecked on a deserted island and they realize the only thing they have in common is getting on each other’s nerves. Will they survive? Will Poe ever see the brighter side of life? Will you stay long enough to see the ending? Find out with this fast, fun, and absurd clown show that people are saying is “like the coolest cartoon you’ve ever seen, but it’s live!”

If you are buying your tickets at the Artworks Theatre Box Office before the show it is CASH or CHECK ONLY.