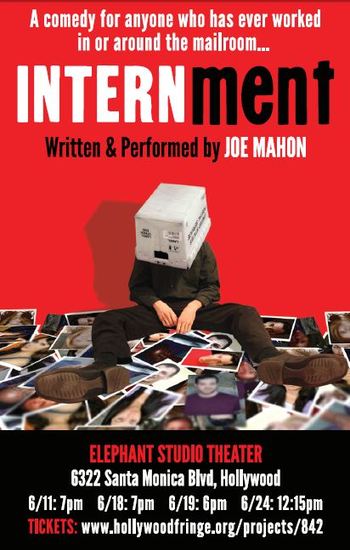 WHAT THE CRITICS ARE SAYING:

“This show begins literally ‘on fire’…It is a riveting performance. INTERNment is a fearless effort.”
-Tracey Paleo, LA THEATRE REVIEW

“…Joe’s acting was excellent. The three characters he created were so different, I had to keep reminding myself that they were the same actor.”
-Maureen Chesus, SOPHISTICATED DRAMA NERD

WHAT THE AUDIENCE IS SAYING:

“Joe Mahon is a chameleon. An actor in the vein of Meryl Streep or Gary Oldman, Mahon nimbly switches between three characters…Mahon’s performance is nuanced, calculated and precise, and grounded in reality. This show is an absolute can’t miss. Definitely worth seeing.”
-Gregory Crafts, Managing Director of Theatre Unleashed; writer of “Friends Like These” and “Super Sidekick: The Musical”

“INTERNment” is the first play to take an in-depth examination of the chaotic, hilarious, and riveting world of primetime television casting, while asking the question: how much are you willing to sacrifice to pursue your dream? The office of DRW Casting is seen through the eyes of up-and-coming casting director Jack Dempsey and two of his interns—Brooklyn-born Riddick and RADA-trained Charles, from London. Individually, these three disparate men lead the audience on an unpredictable and unforgettable training day in the office mailroom.

To provide the feeling of authenticity the show requires, writer/performer Joe Mahon spent a year and a half as an intern at one of the busiest primetime television casting offices in Los Angeles. While the show is laced with humor throughout, like many business-themed dramas before it (“Wall Street,” “Glengarry Glen Ross”), no punches are pulled and the play takes an uncompromising look at the lengths to which ambitious young men will go, and the sacrifices they are willing (or unwilling) to make, as they pursue their careers in the big city.

Please note that the box office accepts CASH ONLY and there will be no late seating for the 6pm performance on August 18.