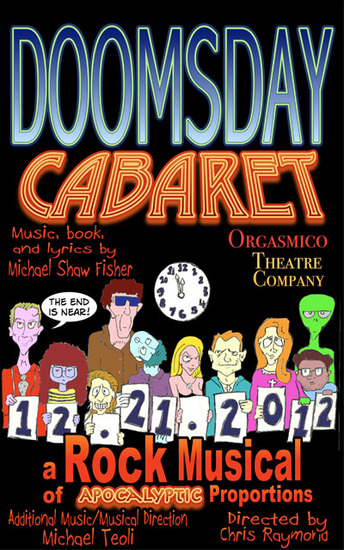 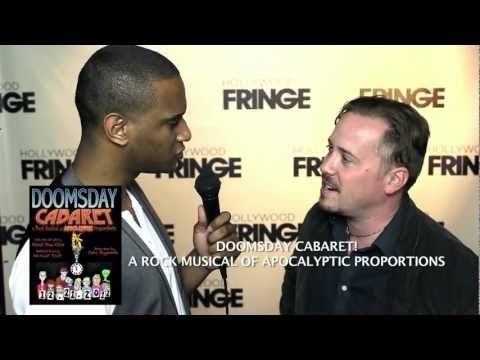 NOMINATED FOR 2 OTHER HFF FREAK AWARDS INCLUDING:
TOP OF THE FRINGE
BEST PREMIERE

“Every member of the cast has a tremendous voice – my socks were knocked off over and over again…Don’t miss this Top 10 show.”
-Bob Legget LA Examiner

“The end of the world is here – and it’s a riot”
-Kurt Gardner (STAGE MAGE, Blogcritics)

“Like other edgy age of Aquarius rock-fests like “Hair,” “We Will Rock You,” and “Hedwig amd the Angry Inch” with much more comedic bent… It’s hilarious, really."
-Tracey Paleo (LA Theatre Review)

“It is quite likely you will leave the theatre singing the refrain from a couple of the songs.”
-Vincent Smetana (CINESNATCH)

From the Orgasmico Theatre Company (The Barking Pig) comes a hilarious rock musical with a very timely subject. It is December 21, 2012 – the date when the Hopi, the Egyptians, Nostradamus and (until recently) the Mayan’s predicted the world would end. An eclectic group of doomsday-obsessed freaks, geeks and capitalists assemble in San Bernardino’s Community Center to argue their theories, hawk their books, and maybe even get laid. As the doomsday clock counts down, each character takes the microphone to deliver a unique rock n’ roll dissertation to the crowd.
Grab a nametag and join the symposium to see which “doomer” will be right? How will the world finally end? What kind of disturbed and embittered individual could possibly believe this crap?
The truth shall be known in time.

WARNING: THIS SHOW IS CERTIFIED ROCK!

With book, music and lyrics by Michael Shaw Fisher (Barking Pig), direction by Chris Raymond (Beginnings) and Musical Direction from Michael Teoli (Carnevil), “Doomsday Cabaret…” is a timely musical that uses humor and a pantheon of rock-styles to explore a sub-culture of outcasts desperate for an armageddon. Backed by a full band, the cast of “doomers” provoke laughs and sympathy as they face the most frightening conceivable “revelation”: friendship.

“We will make you a believer!”

(*All photographs on this page by Elle Garcia Photography)

“There’s betrayal, loss, beatings, theft, prison, music, the loss of small town America, and a beauty pageant. It’s all just so lovely and sad and complicated and, most of all, hilarious. The audience did not stop laughing and it wasn’t from the whiskey, either.”
- Ceebs Bailey, LA Splash

“The Barking Pig is dark comedy at its best.”
-Nataly Chavez, Campus Circle