Everything Else Is War 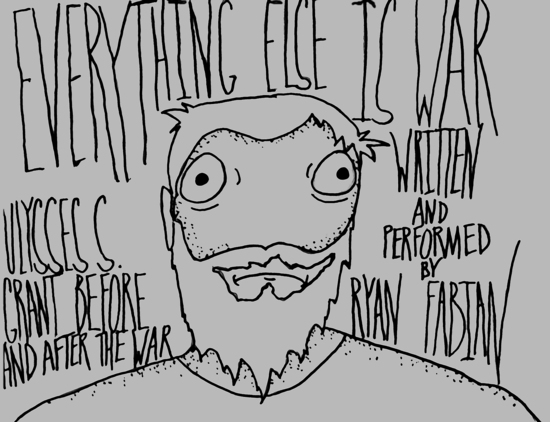 Everything Else Is War sheds a much needed light onto who Ulysses S. Grant was and what his legacy has become in contrast with what it should be. The monologue weaves together important stories from Grant’s life beginning with his days at West Point, where he would graduate 21st in a class of 39. It shows a rarely seen side of Grant; the animal lover who abhors hunting and cruelty, the man who on the surface is the most unromantic figure in history yet gave up his first stint in the military to have his wife at his side, a choice that would have some fateful repercussions. It questions the popular image of Grant as a binge drinker and the depression that seemed to consume him since before the Civil War. It follows Grant after the Civil War as he slips back into becoming a seeming failure as one of the lowest-rated presidents of all time. Grant himself chose to not discuss these things much. For Grant, everything about his life that was important and worth talking about, was war. Weaving in and out the piece are personal, comedic and tragic stories of Fabian’s experience as a very secular person enlisted as a chaplain assistant in the Air Force before and after September 11th, 2001 as well as during the subsequent wars. Personal stories of fist fights, isolation, boredom and general debauchery are compared and contrasted with Grant’s stories throughout.