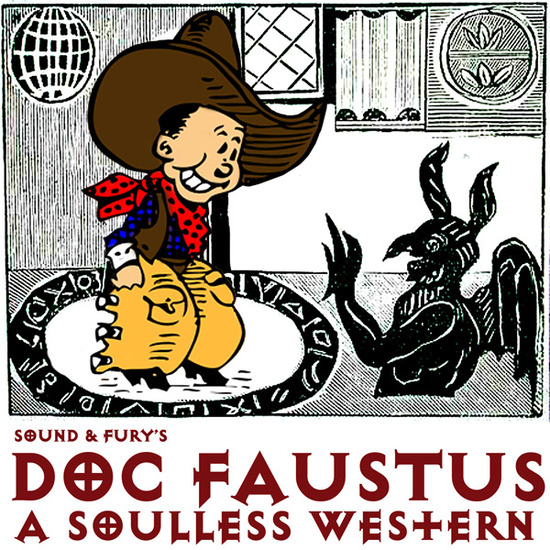 The Vaudeville parody mash-up of the classic Tragical History of Doctor Faustus, and every Western film ever made, from award-winning L.A.-based Sound & Fury™.

“Consistently one of the wittiest acts at the Fringe! Their genius is to combine broad bawdy humour with cleverness and insight!” – dB Magazine.

“A pleasure to watch; simple yet hilarious with three of the most delightful performers of the Fringe all on one stage, chock full of bad ‘Dad’ jokes, with guaranteed laughs, groans and loads of cheek.” – FringeBenefits.com.au (Adelaide).

“To say that theirs is clever comedy is an understatement. They use and abuse ideas from subjects as diverse as physics, mathematics, politics, and literature, and mix it all with a dash of always-funny and never offensive smutty talk and mad cap antics. Three of the funniest guys around. You have to go and see this one!” – Stage Whispers (Adelaide). “5 Stars! Comic genius! All the panache and clever wit of the best British comedy writers of the 20th century! There are a great many must-see shows in the Fringe, but it’s unlikely that you’ll laugh more at any of them than in this inspired hour of humor!” – Edinburgh Evening News UK (for Sherlock Holmes).

“…The lovechild of Monty Python and Dr Seuss! Spoof-tastic!” – The Advertiser, Adelaide Australia

“5 Stars! A punchy, brilliant and hilarious performance …that everyone should catch at least once!” – The Advertiser (Adelaide, Australia)

“5 Stars! The manic energy of The Marx Brothers: these are truly modern vaudevillians at the height of their powers!” – FringeReview.co.uk

“5 Stars! Utterly absorbing and evocative for the imagination. Miss this and miss a real gem!” – Hairline Magazine UK

“4 Stars! It’s impossible to accurately convey in words what an infectiously riotous piece of nonsense this is, just go see it!” – Chortle UK

“5 Stars! From start to finish, the trio had the audience in stitches with this epic but nevertheless bawdy tale!” – ThreeWeeks (UK)

“4 Stars! A delightfully silly mix of the smutty and the literary! Their infectious enthusiasm makes this one of the cheeriest comedies you’re likely to see this month!” –The List UK (for Sherlock Holmes)

“Private Dick is the perfect concoction of suspense, thrills and absolute comic genius. Absolute must see!” – Rip It Up