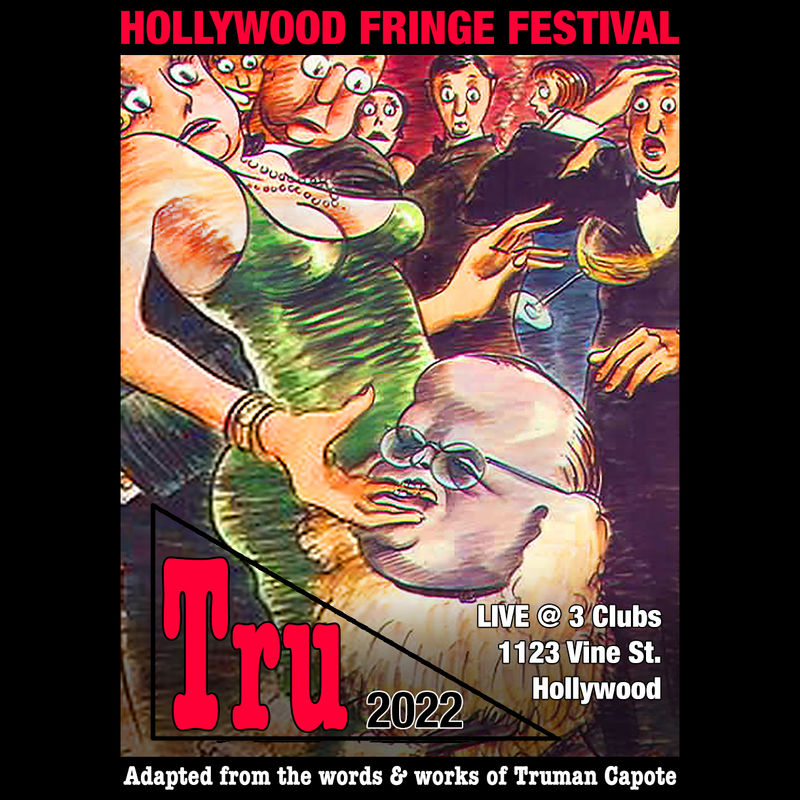 Recently shunned by High Society due to his allowing Esquire Magazine to publish a salacious chapter from his never published novel ‘Answered Prayers’. This one-person show finds Truman “A little agitated!” as he ruminates about being forced into lonely exile at Studio 54.

Tru breaks the third wall as he talks on the phone with friends and associates, speaking directly to the audience regarding his life, career, friendships, lovers and secret childhood wish to be a girl.

Directed by acting legend Joanna Cassidy (Blade Runner, Who Framed Roger Rabbit, Six Feet Under) who also plays two ‘voice characters’. And Starring Jamie Galen who originated the role of Jay Kurnitz in Neil Simon’s Pulitzer Prize Winning play ‘Lost in Yonkers’ and performed the role over 800 times on Broadway at The Richard Rodgers Theater (under the name Jamie Marsh). This production came out of session work at The Actors Studio West and is in tribute to long time Artistic Director and Acting Mentor the late Martin Landau. It is produced by Martin’s friend and protege Devix Szell.

MANY Thanks to THE GREAT Edward Sorel and his butler for allowing us to use his Historical New York Magazine Cover for our poster. Also Thanks to Lucie Arnaz and Sondra Currie for their Dynamic Vocal Talent.

Only the first act of TRU will be performed at The Hollywood Fringe Festival. Runtime approximately 70 min.

Suggested Ticket Price $15 OR Pay What You Can if you are on a budget! No one should have to choose between gas and Theater!!!

Critics Love TRU
Jamie Galen’s uncanny incarnation of Truman Capote…is a must-see tour de force…rendered with great aplomb and panache by Galen who….rather triumphantly brings Truman Capote back to life.
Galen…perfectly captures Capote’s mannerisms, speech patterns, rages and so on….his performance is, as said, an incarnation of Capote – or, perhaps, a reincarnation… his spot on rendition and channeling of Truman is stage acting at its finest.
The solo show is deftly directed by Blade Runner actress Joanna Cassidy.
Ed Rampell – Hollywood Progressive

Jamie Galen is utterly mesmerizing as Truman. He embodies him completely as he seduces us all. And yet this performance doesn’t feel like mimicry, none of the coy affectations and the unique voice feels at all contrived or comic. He oozes the same kind of surreal charm and enigmatic candor that Truman Capote parlayed into a career. I love this kind of performance and Jamie Galen is absolutely masterful. He lures us in and holds our gaze as he agitates and ruminates and entertains. Deftly directed, (by Joanna Cassidy) very subtle and profoundly real. I cannot recommend enough that you saunter over to Three Clubs, grab yourself a sturdy cocktail and spend some time with the master of innuendo and repartee, The man himself, TRU.
Samantha Simmonds-Ronceros – Noho Arts District – nohoartsdistrict.com/tru-review/

The pace is breezy, and the performance is spot on…a poignancy that is deeply affecting…Joanna Cassidy directs with flair & expertise!
Harrison Held’s Scenearoundtown

Tru is a blast! Jamie Galen is great as Truman Capote and I think the play could also be called “Everything You Always Wanted to Know about Truman Capote but Were Afraid to Ask”
Discover Hollywood Magazine