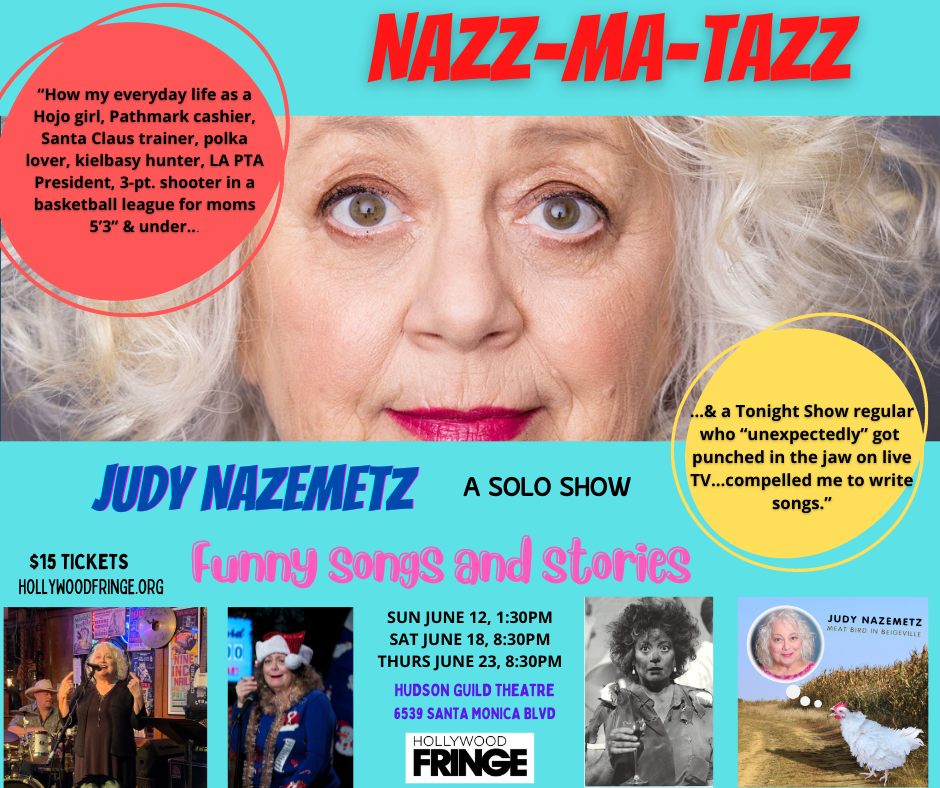 JUDY NAZEMETZ describes her solo show NAZZ-MA-TAZZ as: “How my everyday life as a Hojo girl, Pathmark cashier, Santa Claus trainer, polka lover, kielbasy hunter, LA PTA President, 3-pt. shooter in a basketball league for moms 5’3” and under and a Tonight Show regular who “unexpectedly” got punched in the jaw on live TV one night…compelled me to write songs.”

What’s NAZZ-MA-TAZZ? Besides the latest mispronunciation of her last name, NAZEMETZ (this time by her Costco eye doctor), it’s Judy. Her music. Her comedy. Her stories.

A comedy improv performer from NYC to LA, Judy’s known for her quick wit and ability to come up with songs at a moment’s notice. She’s worked with music legend Mike Stoller and comedy legends Fred Willard, Robin Williams and Ellen DeGeneres. She’s appeared in over 100 comedy bits on The Tonight Show with Jay Leno. She’s “Curleyanne” in The Three Stoogettes shorts. And, yes, Judy’s the lady who called Marcia Clark “a bitch” on nationwide TV (on “The People v OJ.”)

Judy’s released four albums of original music. Her style? You can’t pin it down because Judy’s what you called genre-fluid, singing everything from country to folk to sea shanty to polka, and more.

One hour of Judy Nazemetz isn’t enough — but it’s what you’re gonna get. Buy a ticket. Strap in and enjoy the ride.