Tommy Cooper: I Didn't Let You Down, Did I? 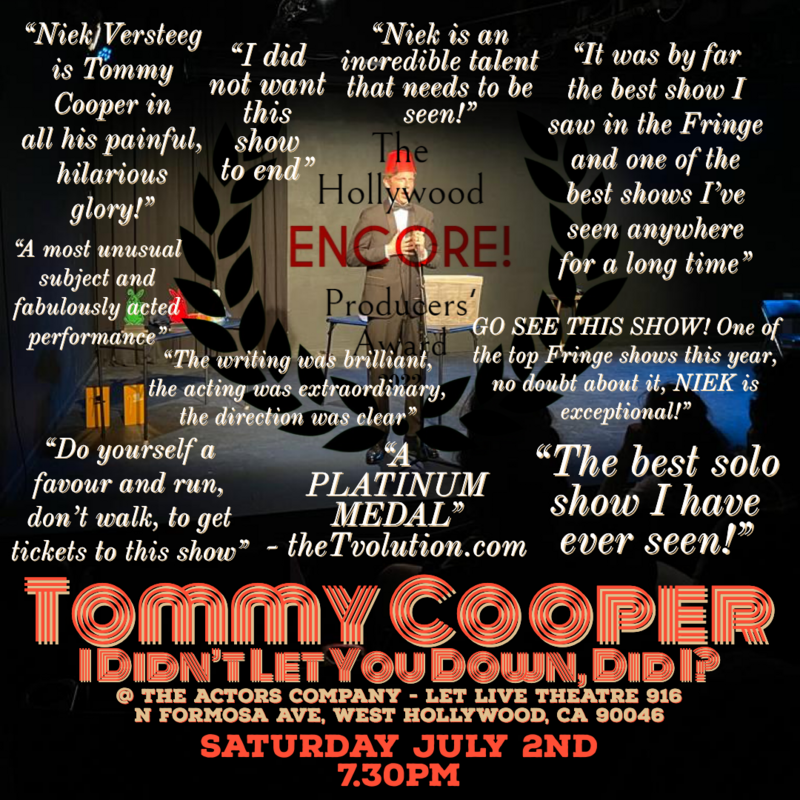 The “Hilarious and heartbreaking” true story of the greatest comedian America has never heard of… Tommy Cooper!

A 45 minute solo show written and performed by Niek Versteeg, directed by Sean Cowhig, and produced by Nicole Cabbiness. This show explores the life of the British comedian and magician Tommy Cooper. A comedian famous for his terrible, deliberately botched magic tricks combined with cringeworthy jokes, he won the hearts of a nation in a career spanning more than 30 years before his untimely death, live on stage and broadcast live on television, in front of the Royal Family in “Live at Her Majesty’s” in 1984, to raucous laughter and rapturous applause. The perfect send off for a comedian who lived to make people smile. This show uses some of Cooper’s classic performances and tricks, while also diving deep into the heart of a man who battled many demons. A chronic alcoholic who was equally in love with two women, his wife and his stage manager, we see him wrestle with his choices and mistakes as the walls close in on him on all sides, the Brandy runs dry, and the final curtain approaches.

Tommy Cooper has stood the test of time to be recognized today as one of Britain’s funniest comedians of all time. His act, and his personality, were truly unique. Niek has been fascinated with Tommy his whole life. His father has a deep affection for the man in the fez and would watch old re-runs of Tommy’s shows with his son from an early age. Niek became fascinated not only by the comedy and magic of Tommy, but also by the man behind the act. He famously didn’t talk about his own life very much, he never wrote an autobiography or appeared in any “tell all” interviews (he did famously break down to Michael Parkinson over a horse-racing bet, but as always there was a punchline). After reading more about his life through biographies and what his father knew about him, Niek discovered a deeply troubled soul beneath the comedian, an insecurity that ran under everything constantly telling him he wasn’t good enough, that they would all cease to laugh next time, and a growing dependence on alcohol to cope. How could such an intrinsically funny man be so fearful that the magic would leave him? This is what drove Niek to write this show, to explore why Tommy (and a whole host of comedians before and since) had these doubts, and how he coped with them and his crippling addiction in order to be funny every single day, until it killed him.

This show was first written, directed, produced and performed by Niek Versteeg at the Art of Acting Studio in January 2020 as a 15 minute solo show. This show has been expanded from its original length to 45 minutes, featuring some Classic Cooper moments, intimate personal exploration, and of course, his famous red fez.