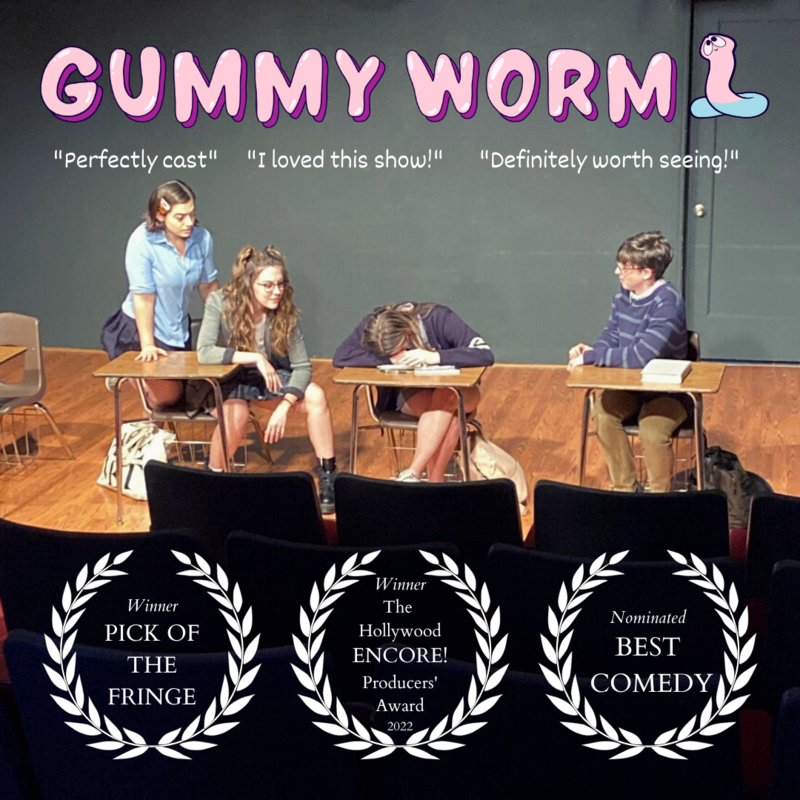 Gummy Worm, written by New York playwright Nathaniel Foster, follows four high school juniors in over their heads when they sign up for their high school’s abstinence-only sex-ed class. Taylor (Grace Ruble) attempts to manage her anxiety. Sophie (Michelle Persoff) hurries to become a liberated woman. Alaska (Hailee Domagalski) ranks the group’s sexual prospects. And Benjie (Caden Healander) just wants everyone to play it safe. Confessions are made. Risks are taken. Long-standing friendships are tested. The audience returns to their youth as they witness these teens, at the height of their intelligence, working out the mysteries of their sexual awakening.

Nathaniel Foster has crafted a play propelled by a wit that can best be described as “adolescent-Sorkin”. He treats fraught topics such as social media, sexual politics, and less-than-medically-accurate sex education standards with a light yet poignant observation. Never one to preach, Foster allows his characters to dialogue in the same way he invites his audience to reflect – by stripping away the politics in favor of personal discovery and growth.

Check out our listing on Broadway World: https://www.broadwayworld.com/los-angeles/article/GUMMY-WORM-Shines-Spotlight-On-Sex-Ed-at-Hollywood-Fringe-20220503