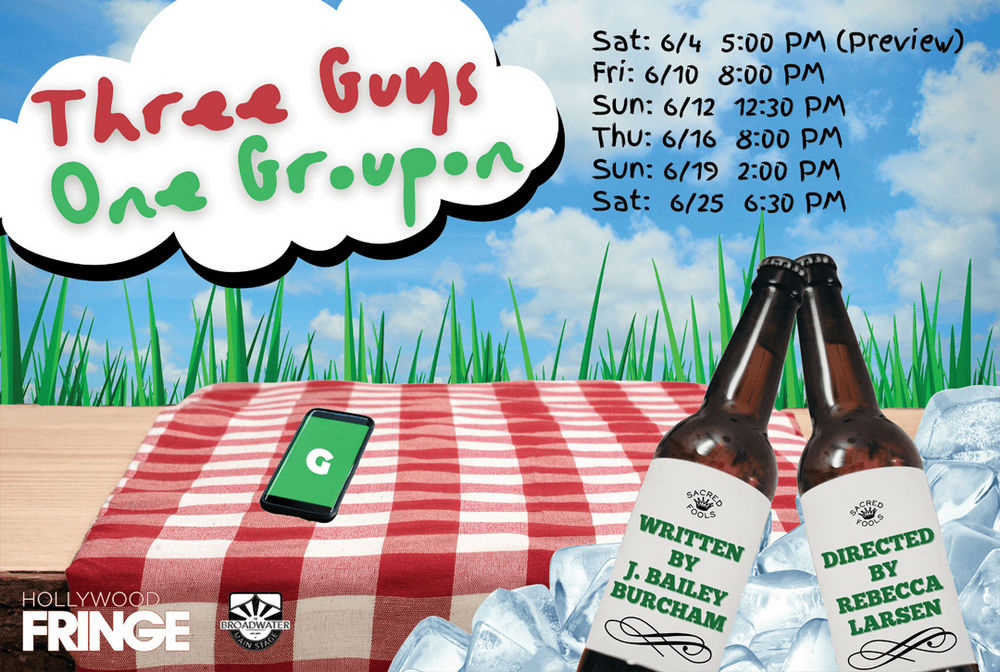 Sacred Fools welcomes you back to the theater with a healthy dose of sweetness. We offer Three Guys, One Groupon as a chance for audiences to take a load off from the stresses of life with their new best friends, Stan, Geoff, Craigory and Ollie. On this, a very special day, the “men” (played by women) share their wholesome hearts as they crack some beers, watch the sunset, and try to decide on the perfect Groupon activity to do together.
The genesis of the show began during the Spring of 2019. The Broadwater’s hit sketch comedy competition, Serial Killers, was in full swing and had been running for a few months. Playwright, J. Bailey Burcham, had a piece competing in its 12th week called Basil and Dick; so when one of the five sketches had to drop out that week, the team came to Bailey for help. “We need a simple sketch that can be put up easily; it doesn’t have to be good, it just has to fill a slot.” Bailey, wanting to help but not having much time on his hands, wrote out a note on his phone. Four pages of long, drawn-out sweetness.  Three dudes choose a Groupon together while being super nice. That’s it.
The piece was then handed over to director, Rebecca Larsen, who saw potential in it right away; most impressively realizing that the piece could work even better if it wasn’t actually played by cisgendered men. She cast it, rehearsed it and put it up in less than a week and somehow… It worked. Maybe it didn’t have any belly laughs, but you could feel something in the room. Something special.
After eight more episodes Three Guys became a sensation. Patrons were actively coming to the show to get their fix of joy for the week. After battling it out in Finals against some phenomenal sketches, Three Guys won the entire competition. Basil and Dick, the original powerhouse sketch by Bailey, came in second place. Then the pandemic hit…
In a time when everything was heavy, Three Guys became Bailey’s outlet for exploring lightness. A lover of absurdity, existentialism and other Godotian sensibilities, he realized that the sketch had legs as a one-act. After two years of honing the piece, he feels as though it is ready for audiences. This often silly exploration of sweetness, masculinity, friendship and love is a comedy that is guaranteed to keep you in a consistent state of giggle. A spoonful of sugar reminding us that while we may not be promised tomorrow, we’ll always have each other.
Starring: Cj Merriman, Amanda Blake Davis, Rebecca Larsen and Leigh Wulff
Directed by Rebecca Larsen
Written by: J. Bailey Burcham
Produced by: Scott Leggett
*MASKS WILL BE REQUIRED ALONG WITH PROOF OF VACCINATION