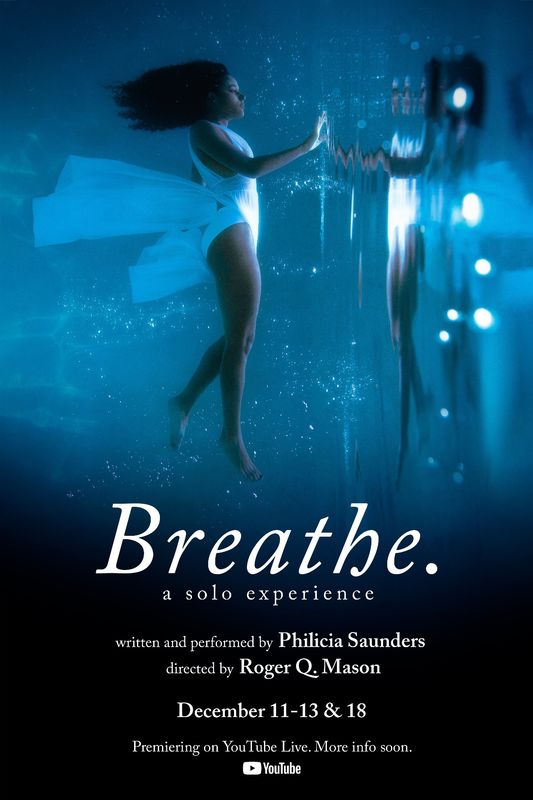 With the recent political, racial, and global unrest occurring throughout 2020, the premiere of Breathe., a live-streamed multimedia form of art activism and interactive theater event fusing live performance, cinema, and artistic swimming in a hybridized narrative that could only be born during these challenging, yet galvanizing times. Philicia Saunders (Black is King, Tabala Zo in Star Wars: The Force Awakens & The Rise of Skywalker) wrote and stars in this one-woman live theater show portraying 20 characters. Breathe. is based on her life-changing personal journey towards activism after a chance trip to a Civil Rights monument during a civil rights tour in Alabama and mentorship by a luminary of activism, Sweet Alice Harris, one of Watts’ most beloved community organizers. The piece is directed by Saunders’ fellow Princeton alum Roger Q. Mason (playwriting seen at Circle in the Square, New York Theatre Workshop, American Theatre of Actors, Son of Semele, Skylight Theatre, among many others).

Breathe. evolved from Saunders graduate school thesis called Sick and Tired of Being Sick and Tired which was a series of taped interviews that she had with Sweet Alice from 2012, and now in 2020 these interviews are more relevant today and are seen in this current version of Breathe. It’s important to note that some of the themes and events which occurred in the 1965 Watts unrest are still relevant and unfortunately happening in 2020. Parents of Watts organization was created by Sweet Alice as a result of the Watts unrest of 1965. (Coincidentally 2020 is the 55th Anniversary of the Watts riots).

As Saunders learned from Sweet Alice: “You can’t just be silent and stand in one place.” This highly unique production is sure to spark discussion and action among viewers everywhere. Breathe. is being performed and recorded at the Broadwater in Hollywood and facilitated to online through _Outpost_13, an accessible sanctuary for artists, creators, unsung storytellers and audiences to realize their imagination by combining technology and live theatrical experience.

The virtual premiere of Breathe. streams on YouTube (except for Dec. 13 when it will be Twitch) – LIVE on Friday, Dec. 11 at 5:00 p.m. PST and on Saturday, Dec. 12 at 3:30 p.m. PST. Encore performances with post-performance Talkbacks will take place on Sunday, Dec. 13 at 2:00 p.m. PST (this presentation plays on Twitch and is pay-what-you can; Talkback is with Sweet Alice) and Friday, Dec. 18 at 5:00 p.m. PST. Registration is available at http://breatheshow.eventbrite.com on a sliding scale between $5-$50 with a portion of the proceeds going to Sweet Alice’s nonprofit Parents of Watts and the Community Coalition.

“Our country paints fringed peoples as monoliths. Through Breathe., Saunders dynamically disrupts such a singular vision of Black life, womanhood, and youthful professional and personal yearning. In the piece, we assay a young middle-class Black woman who has access to many of the same experiences that are typically associated with her white counterparts (i.e. private school education, the Ivy League, travel, artistic swimming, etc.). One would think she has the access and socio-economic power to “buy” immunity from systemic racism. However, as Saunders’ work reveals, there is still a palpable disadvantage to living while Black and female in America and Europe,” exclaims Mason.

“Breathe. was an ever-changing and intriguing passion project for me. It’s been a year in the making and I am so proud of how far it has come. Writing and acting in this play has elicited very strong emotions for me, but the inspiration, sense of satisfaction, and meaning that came from putting this show together has carried over into other areas of my life in a beneficial way”, explains Saunders. “I am eager to start making a change and spark those conversations that we need to be having – about racism, identity, silence, action. I dedicate this show to my parents and my parents’ parents and my ancestors before them, and to those who have lost their lives to acts of hatred and senseless violence. I also dedicate this show to those who still can’t breathe.”

Philicia Saunders (actress/playwright) is an American actress of Jamaican and African-America parentage. She is best known for her role as Tabala Zo in the Star Wars Universe, The Force Awakens and The Rise of Skywalker. Born in Los Angeles, her early formal education nurtured her interest in the performing arts. Saunders attended Princeton University where she participated in live theater performances, and as her senior thesis project she presented a solo performance of Anna Deavere Smith’s one-woman show, Fires in the Mirror. Completing her master’s degree program in acting at UCLA School of Theater, Film and Television, Saunders she appeared in many stage productions, including William Wycherley’s The Country Wife, Elmer Rice’s The Adding Machine and Noël Coward’s Hay Fever. She also attended the British American Drama Academy in Oxford, England with an emphasis on classical acting and Shakespeare. In addition, Saunders attended the Guthrie Experience for graduate actors in training in Minneapolis, MN. During this time, she also worked as a production and casting intern on Quentin Tarantino’s Django Unchained, Salim Akil’s Jumping the Broom and Justin Tipping’s Kicks.

Saunders started her professional career in acting when she made her STAGE debut at Ark Theater in Los Angeles as Hermia in William Shakespeare’s Midsummer Night’s Dream, portraying Portia with the Independent Shakespeare Company in a production of William Shakespeare’s Julius Caesar, and at Stage 52 as Monica in a Jamaican play called Which Way is Out? Her FILM debut started with a series of featured roles in 88 Soul, Don’t Let Her Pull You Down, Blaxican Brothers, The Doctor of Bagram, Enhanced, Sleight, Black is King, and Straight Outta Compton. She has appeared in films with supporting and lead roles in Star Wars: The Force Awakens, Star Wars: The Rise of Skywalker, Bound to Kill, The Morning After, Come Here Often?, He’s Watching and Poe. Her TELEVISION credits include co-star and featured roles in Shameless, REL, Speechless, Strange Angel, Bulge Bracket and Lost Angeles. Saunders is also a competitive artistic swimmer and volunteers with local children’s theater groups in Los Angeles.

Roger Q. Mason (he/they) (director) is an award-winning writer, performer and educator. As a Black, Filipinx, plus-sized, gender non-conforming, queer artist of color, Mason is known for using history’s lens to highlight the biases that separate rather than unite us. Their playwriting has been seen on Broadway at Circle in the Square (Circle Reading Series); Off/Off-Off-Broadway at New York Theatre Workshop, New Group, American Theatre of Actors, Flea Theatre, and Access Theater; and regionally at McCarter Theatre, Victory Gardens, Chicago Dramatists, Steep Theatre, Serenbe Playhouse, EST/LA, Son of Semele, and Skylight Theatre. He/they are an honoree of the Kilroys List; the recipient of the Chuck Rowland Pioneer Award and the Hollywood Fringe Festival Encore Producers Award; a finalist for the Geffen Writers’ Room, Lark Playwright’s Week and the Screencraft Play Award; and a semi-finalist for the Page 73 Playwriting Fellowship. Mason has directed and developed new plays with Ensemble Studio Theatre/LA, Son of Semele Ensemble, Edgemar Center for the Arts, and USC School of Theatre’s Drama Club. Mason’s films have screened at Outshine Film Festival, Rochester LGBT Film Festival, and the Pan African Film Festival. They’ve been recognized by the AT&T Film Award and Atlanta International Film Festival. Mason holds degrees from Princeton University, Middlebury College, and Northwestern University.

Jessica Hanna (producer) is a Los Angeles based Director & Producer. A member of The Kilroys, an activist artists group working for gender parity in the American Theatre. Artist in Residence at Thymele Arts in 2019. Trained with SITI Co. since 2002, performed with the company in 2010 & 2013 at The Getty Villa and is currently on the Exec Committee of SITI Co.’s Board. Co-Founded Bootleg Theater and was its Producing & Managing Director for 12 years. Focus has been on new work development. Directing credits include world premieres of Death Play by Lisa Sanaye Dring, No Homo by Brandon Baruch, Four Chords and a Gun by John Ross BowIe, I Carry Your Heart by Georgette Kelly, The Willows by Kerri-Ann McCalla and Blue Gold & Butterflies by Stephanie Batiste. Guest director at CalState University Long Beach, Occidental College, CalArts and CalPoly Pomona. Currently directing Iris Bahr’s DAI 2.0 that will be live streamed on Outpost_13 on Twitch in November. Currently producing Katie Lindsay’s A Walk In My Neighborhood – A Scheduled Audio Walk Experience.

Parents of Watts was founded by Sweet Alice Harris, a prominent community activist in Los Angeles who has dedicated her life to mentoring youth and providing assistance to people who are disadvantaged or underserved. Parents of Watts is a social services organization that she started out of her home in the mid-1960s as a way to alleviate tensions in her culturally diverse neighborhood after the 1965 riots. The nonprofit organization encourages children to stay in school and avoid drugs. Operating on a shoestring budget out of eight homes on Lou Dillon Avenue, the organization’s programs provide emergency food and shelter for the homeless, prepare teenagers for college and the job market, and offer drug counseling, health seminars and parenting classes.

The Community Coalition works to help transform the social and economic conditions in South LA that foster addiction, crime, violence and poverty by building a community institution that involves thousands in creating, influencing and changing public policy.