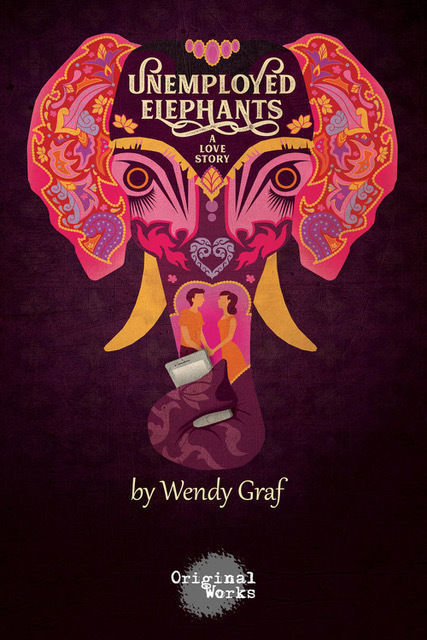 A chance meeting in an airport lounge leads to a Burmese odyssey and a search for a missing monk… and maybe love. John Lacey directs the “virtual premiere” of Unemployed Elephants – A Love Story, a romantic comedy by Wendy Graf (No Word in Guyanese for Me, Exit Wounds). Performance date is: Saturday, June 20th @6 PM PST.
Two strangers lost, hidden… and found? Kerry Knuppe (Ryan Murphy’s Hollywood, Heartland) and Marshall McCabe (World Premiere production of Unemployed Elephants – A Love Story, lifetime member of The Actors Studio) star as Jane and Alex, both on the run from loneliness and the truth. This might be their last chance to find true love – if only they can seize it!
Called "A TOUR DE FORCE of rat-a-tat dialogue, interjected with plenty of arcane facts about a fabulously exotic locale” by the LA Times, “a charming story of love, loss, and new love…will charm its way into even the stoniest of hearts” by LA Splash, and “an absolute must not miss!” by LA Post Examiner.

Graf is best known for writing dramas that explore themes of family, identity and home within the context of contemporary politics. Elephants was her first comedy, inspired by a trip she took to Myanmar in 2015.
“The trip highlighted and encapsulated for me our modern sense of feeling adrift, seeking something without knowing quite what, trying to ground oneself in the constant barrage of apps and crazes and shoulds and how-tos,” she says. “I felt as if I had walked headlong into a strange new world, a monsoon, not knowing what would happen next.”
Graf is quick to point out the play was written (and therefore set) nearly two years prior to the flight of more than 400,000 Rohingya to Bangladesh to escape a military counter-insurgency offensive the United Nations has described as “ethnic cleansing.”
“Some people might question a romantic comedy set in a country currently at the heart of what many are calling genocide,” she acknowledges. “Looking back, I now recognize the turmoil roiling beneath the surface during my visit. But at the time, we saw nothing, we heard nothing. The trip was planned because I had just watched a segment on 60 Minutes that was all about hope for democracy in ‘The New Burma’.”
Wendy Graf is an award-winning playwright whose plays include Exit Wounds (first Place Winner Moss Hart and Kitty Carlisle New Play Initiative); Unemployed Elephants – A Love Story (Stage Raw Top Ten Recommended, multiple Critics’ Choice); Please Don’t Ask About Becket, All American Girl (Stage Raw Award nomination for Playwriting, Los Angeles Times Weekend Pick; LA Weekly “GO!”, StageSceneLA 2015 Outstanding Solo Performance Production; Bitter Lemons 2015 Ten Best); Closely Related Keys(directed by Shirley Jo Finney); No Word In Guyanese for Me (GLAAD Media Award for Outstanding L.A. Theater, Bitter Lemons “Top Rated” production); Behind the Gates; Lessons (L.A. production directed by Gordon Davidson); Leipzig (L.A. Drama Critics Circle nomination, Back Stage Garland award, Dorothy Silver Playwriting Competition finalist); The Book of Esther (San Fernando Valley Artistic Director Award nomination for Best Play, ASK Theater Projects Grant Award); and Bethany/Bakol(Attic Theater One Act Winner). Ms. Graf is a member of Ensemble Studio Theatre/LA and Pacific Resident Theatre writing units and the Dramatists Guild of America.

John Lacey’s recent work includes “Gardel’s Tango” at The Zephyr Theatre (now available through Amazon Publishing), “Showdown at the Temple of Meat” at Greenway Court Theatre and “The Tango Singer” at Theatre West.