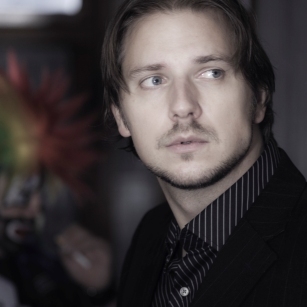 “…gut-bustingly hilarious…Thomas has compiled a wild hour of scenes and vignettes, filled with great writing and punch lines…”
- nytheatre.com

“…their mix of absurdity and plausibility and makes all of [Thomas’s sketches] funny.” – Time Out New York

A jackass of all comedy trades, Paul Thomas was half of The Defiant Thomas Brothers, winners of Best Sketch Group at HBO’s 2005 U.S. Comedy Arts Festival. Last year he performed solo pieces in the inaugural Just for Laughs Chicago, and his solo work also includes the questionable love story Waitress Wanted.

Thomas is a stand-up comic, and was recently named to Comedy.com’s Top 20 stand-ups in Chicago. On the musical front, his “post-grunge” acoustic comedy rock band Lola Balatro released its debut album last June, with songs like “I Got 2 Black Friends,” and “Questionable Beef.” Thomas has also written, directed, and produced some short films, which can be viewed on his website bigheadpaul.com.