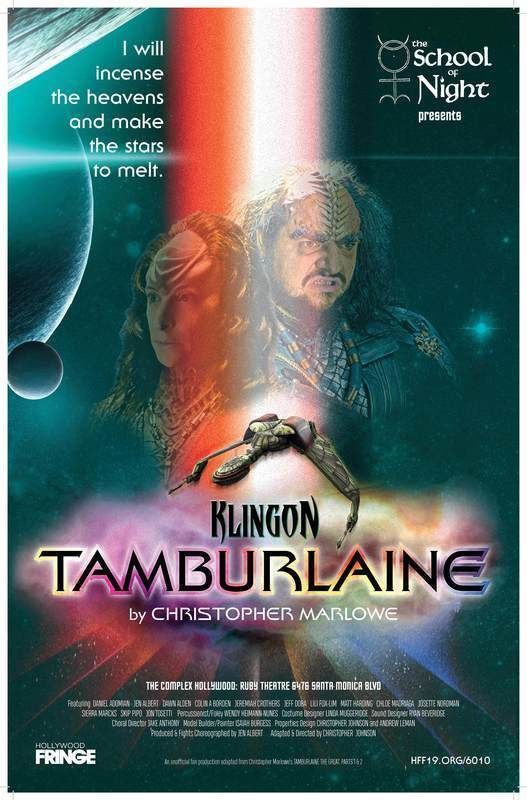 Though Kahless himself, angry god of arms,
And all of Qo’noS’s potentates conspire
To dispossess me of this new-won crown,
Yet will I wear it in despite of them
As great commander of all Klingondom.
Full bowls of bloodwine to the god of war!
-Tamburlaine the Great

Seldom in the annals of legend and song has a conqueror’s rise been so meteoric as that of the emperor Tamburlaine.

Born a lowly shepherd he has risen to renown as dread bandit-warlord of the Central Plains of Qo’noS. By winning and enlisting the Imperial army dispatched to kill him, he has defeated and dethroned the aging emperor Mycetes.

Now new-crowned Emperor Tamburlaine pushes out from Qo’noS in a bloody spasm of conquest, planet after planet falling to the self-proclaimed Scourge of God.

But across the Neutral Zone, the Romulan Empire is watching warily. Fearful of Tamburlaine, they forge an alliance with a former hated foe … the Federation.

And so the stage is set for the ultimate battle, a clash to determine who rules the galaxy. Can the Romulans and Federation bury past hatreds? And if so, can they hope to stand against the raging martial tide of Tamburlaine?

The School of Night is proud to present Christopher Marlowe’s medieval pageant of will, war and conquest re-imagined as epic sci-fi spectacle. Tragedy! Romance! Mighty verse! Great battles waged on land and in space! Honor and glory! Qapla’!

An unofficial fan production adapted from Christopher Marlowe’s Tamburlaine the Great, Parts I and II.