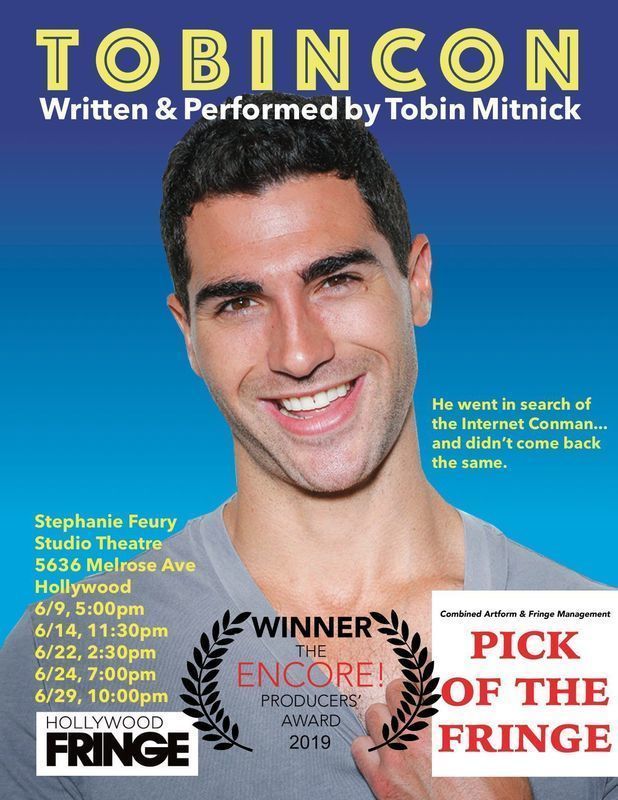 Actor and comedian Tobin Mitnick sheds light on three con men that are using their style-savvy to manipulate a generation of young Americans through the unregulated Wild West that is the Internet. In its world premiere, one-man comedy TOBINCON dives into the grotesque and hilarious world of online grifters—the Body Prophet, the Rhetorical Bad Boy, and the Compassionologist—with sketch and stand-up, in order to show us that the game may have changed, but the players are all still here. But Mitnick also answers a lingering question: When you spend so much time rubbing shoulders with these types, will it rub off on you? In other words, can you con yourself?

Fresh off his one-man sketch pilot “Man Alone” winning Best Actor at the Los Angeles Comedy Festival, Tobin Mitnick turns his attention to a different set of characters that prey upon our deepest insecurities and line their own pockets while they’re at it. His blend of absurdist sketch work and stand-up incorporates his own biography and history of douchbaggery in order to give us a privileged look into the psychology of the internet con man from a guy who’s glimpsed the dark side himself. But as TOBINCON goes on, we move into a different sphere—one where Mitnick discovers a hidden truth within the realm of comedy and satire: when you spend so much time in the water, you’re probably going to get wet. With direction by his wife Amanda Stoffel Mitnick, TOBINCON is an uproarious—and wildly personal—journey into a new world of charlatans.