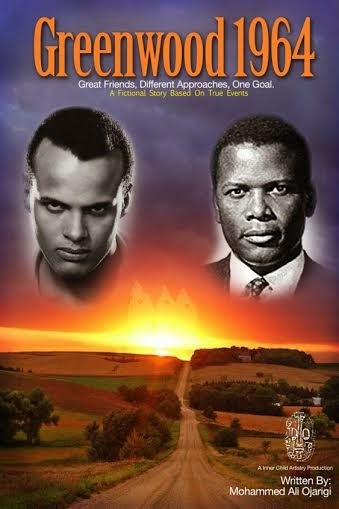 GREENWOOD 1964 is a powerful, educational two man one act show which takes us into an actual trip made by Sidney Poitier and Harry Belafonte. Two very great friends and once industry’s most successful sought after duo. Sidney Poitier the first Black to win an Academy Award for best actor and Harry Belafonte, activist and first music artist ever to sell a million copies in the US & England. The show takes place in Greenwood Mississippi 1964, a time in which Dr. King called it “The year of promise” due to the rise of racial tension versus the quest for social equality. This brilliantly crafted fictional debate between Mr. Poitier and Mr. Belafonte eloquently explores the individual approaches on how to achieve liberation for people of color. The action takes place inside of an attic “safe-house” in the racially charged segregated deep south of Mississippi. Both men have traveled down to drop a bundle of cash for relief funds and show moral support for the civil rights workers who have been killed trying to register black voters.