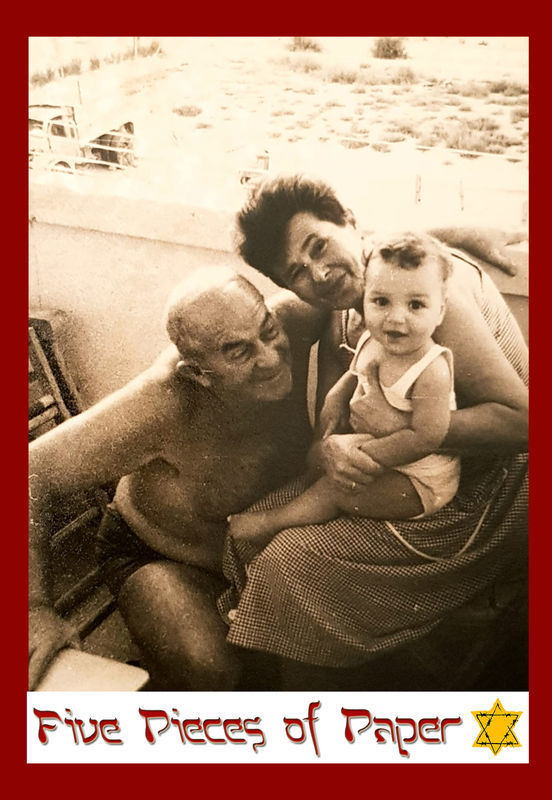 Five Pieces of Paper
Stories my Hungarian grandmother refused to tell me and other family tales.
This show was created in response to the 2017 Charlottesville riots at the University of Virginia by Moti, the grandson of a Holocaust survivor. Moti reveals lessons learned from his Hungarian grandmother who began her life’s journey in a village in Hungary, survived the Holocaust, and eventually settled in a small town in Israel. Told as a personal love narrative, this emotional rollercoaster unfolds through acting, Yiddish song, puppetry, storytelling, and on-stage baking. This spiritual ritual is meant to reveal and heal the trauma of Moti’s familial past.

How do you talk about one of the darkest eras in human history and keep a balance between having the conversation be emotional, personal, engaging, and thought-provoking yet not overwhelming and depressing? Buchboot, an Israeli artist who moved to Los Angeles in the early 90s, was profoundly affected by the 2017 Charlottesville riot. Having never encountered anti-Semitism himself, he decided to bring the story of his Hungarian grandmother (a Holocaust survivor) to life. In this solo show, he displays his talents as an actor, singer, puppeteer, clown, dancer, and amateur baker as he takes the audience on this emotional journey through his family’s history.

Moti Buchboot was featured in the role of Giant Blunderbore in Jack and the Beanstalk, the Panto at Santa Barbara’s Lobero Theatre. He has also been seen in Pieces of Eight at the Met Theatre (directed by Martha Gehman). He co-created Dialogos at the Unknown Theater and created and directed Love, Loss, Lust, and a Tango at the Barnsdall Theatre. He has appeared in national TV commercials as well as on the History Channel, PBS, and MTV. He wrote, directed, and starred in Soul Dance, a short film that made the independent film festival circuit. He is also an author and a photographer. Current projects include Money, the Musical directed by Michael Pollock at Second City Hollywood and Word, a puppet show directed by Roberto Ferreira at the LGBT Center’s Davidson/Valentini Theatre. He also has two short films in post-production.

Martha Gehman (co-director) is an actress and director. She began her career as a student at the School of American Ballet under the direction of the legendary George Balanchine. She spent 10 years there and then received her BA, having studied acting and playwriting as well as experimental and improvisational theatre at Sarah Lawrence College under Wilford Leach. She is a member of New York’s Actor’s Studio and has worked with such artists as Ellen Burstyn, Ann Jackson, Arthur Penn, Lee Grant, Harvey Keitel, and Christopher Walken.