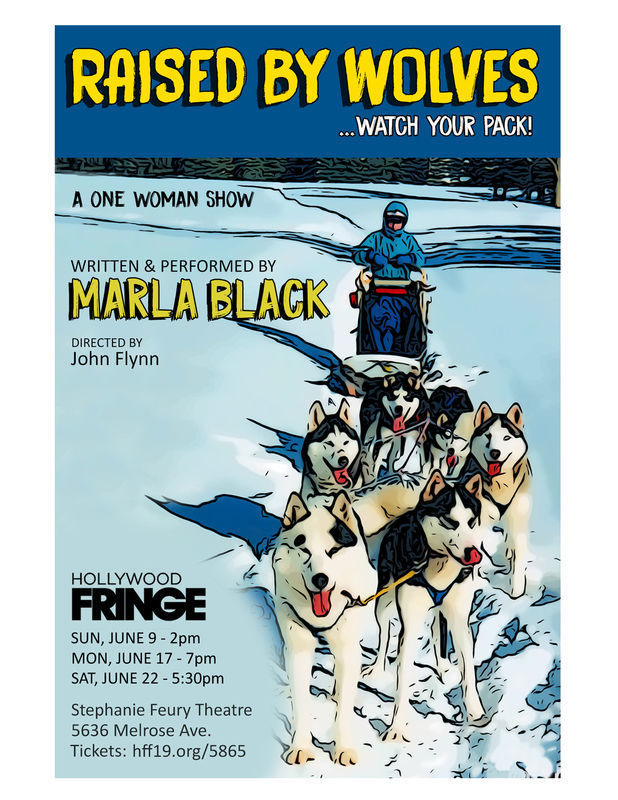 You learn to survive quick when you’re being dragged behind a team of sled dogs. A comedy about a girl and her dogsled team navigating the rocky terrain of growing up and her quest to become the alpha of her own pack.

“A strikingly adept blending of humor and horror as performer Marla Black and director John Flynn takes their audience along on a skillfully crafted sled ride that turns down an unexpected dark path…. PLATINUM MEDAL.” – Ernest Kearney, THETVOLUTION

“This was a Ted Talk/Seminar disguised as a Fringe show, and would be a bargain at ten times the price. Don’t miss this priceless and thought-provoking show.” – Bob Leggett, LA MUSIC CRITIC

“…among the solo shows at Fringe this year, this world-premiere from Marla Black is an Alpha. You will laugh, you may cry, and you will most certainly enjoy “Raised by Wolves.” – Zachary Bernstein, FRINGE REVIEW

“Someone please pay this woman mega bucks to make this into a TV show!” – Kristina Mueller

“This was legit. The best solo show I’ve seen in the festival so far.” – Sam Pocker

“This show was amazing and incredible. Marla’s performance was stellar and her writing was so perfect. One of the best shows I’ve seen this fringe.” – Angela Beevers

“The show was excellent. Well written, incredibly performed and a story that became increasingly engaging as the play continued. That’s a feat in and of itself. The audience was on the edge of their seats wondering where this story would lead and no one left with a dry eye.” – Erin Simms