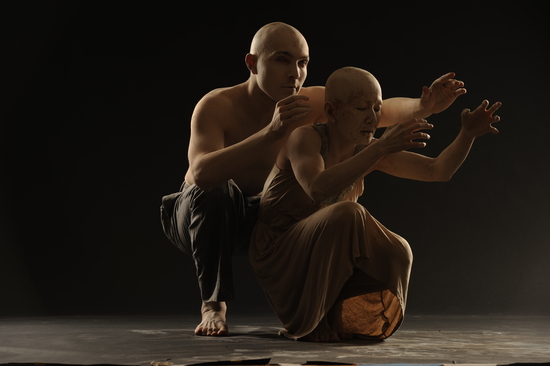 In this participatory workshop with internationally acclaimed physical theatre artists Jordan Rosin and Yokko, students will use principles from diverse theatrical traditions (Butoh Dance in particular) to cultivate the awareness, creativity and articulation necessary to move, create, & dance with resonance. Drawing on Pure Movement, Noguchi Gymnastics, Alexander Technique, yoga, martial arts, as well as systems of movement analysis like Viewpoints, Laban, and Bartenieff Fundamentals, teachers will help students to expand their expressive capacity while cultivating the awareness and sensitivity necessary to make healthy and sustainable choices in creation, rehearsal and performance. Through devising assignments and work with both classical & contemporary Butoh-Fu, students will develop the tools and confidence to create their own unique work in a variety of disciplines.

Suitable for performers and artists of all varieties and levels of experience.

REGISTRATION:
To register for all-four days, click here: https://resonantbodieslosangeles2019.bpt.me
(Single-day registration can be found here on the Hollywood Fringe website after May 1.)

ALL PAYMENTS ARE NON-REFUNDABLE

JORDAN ROSIN is a physical theatre artist, director and teacher, specializing in Butoh Dance, the post-war avant-garde movement form from Japan. He also draws on yoga, acrobatics, and contact improv along with popular theatre forms like Commedia DellArte, Clown, and Melodrama to create theatre and dance events with popular and poetic resonance. He received his BFA in Drama from Syracuse University and has trained with numerous teachers of butoh including Yoshito Ohno, Joan Laage, Vangeline, Diego Pinon, Tetsuro Fukuhara, and more. Jordan was a Co-Founder & Producing Artistic Director of the NYC-based physical theatre ensemble, The Ume Group from 2011-2016 and is a frequent collaborator with the butoh company Ren Gyo Soh. Choreography credits include the internationally acclaimed Butoh Medea, which won Best Physical Theatre & Best Choreography at the 2015 United Solo Festival and has been performed in Turkey, Italy, Scotland, and Poland; plus The Ume Groups Butoh Electra; Facet; Isis Variations; Dream Dances; and Lysistrata Project. Jordan lives in Blue Lake, CA with his wife, Kaitlyn where he is pursuing an MFA in Ensemble Based Physical Theatre from DellArte International and performing regularly with the DellArte Players. For more info, visit: www.jordanrosin.wordpress.com //@JordanRosin

YOKKO is an actress, Butoh & Theatre Artist, Movement & yoga instructor from Nagoya, Japan. She has acted in, devised and choreographed a variety of local and international shows, having won several awards, including Best One-Woman Show for her Butoh Medea (United Solo 2014 at Theatre Row). Butoh Medea was selected to perform at United Solo Europe in Warsaw, Poland in June, 2015, then toured to Edinburgh Festival Fringe 2015, and selected for the short list of The Asian Arts Award. Butoh Medea has been touring USA & Europe since 2015. Other theatre credits include Hide Your Fires (Nu Works Festival 2017, United Solo 2017), BALDY (Center of Remembering & Sharing; United Solo 2013; Hollywood Fringe 2013; FringeNYC 2012; Dorothy Strelsin Theatre), Antigone (Planet Connection 2016), Butoh Electra (Irondale Center; FringeNYC 2011), and many others. Dance credits include Isis Variations (Fringe NYC 2014); Facet (Hollywood Fringe 2013; Wave Rising Series); Cappricho (Dixon Place), and many others. Yokko also acted in several of local and international films, one of which was the silver winner film for Student Academy 2016, Cloud – Kumo-.  She is the associate artistic director of The Ume Group as well as the artistic director of Ren Gyo Soh in NYC.

She has been giving her workshop “Butoh & Movement for Physical Theatre”, “Movement for Actors” in festivals & Universities in USA and Europe.  https://www.yokko-online.com/

ABOUT THE PRACTICE:
ABOUT BUTOH:
Ankoku Butoh (暗黒舞踏 – “dance of utter darkness”) is a style of dance and philosophy of creating total theatre which originated in Japan in the mid twentieth century. It is often marked by grotesque imagery and taboo themes. Now a largely international movement, an emergent aim of the work for many twenty-first century practitioners is the revelation of tacit knowledge hidden in the body and a sort of self-realization brought about by “piercing the mask” of our socialized everyday behavior. Butoh training can therefore promote great physical endurance and expressiveness, spiritual consciousness, and creativity.

ABOUT DEVISING:
Devising is a broad umbrella term which encompasses a variety of methods for making original theatre, dance, or performative works either solo or in collaboration with others. While devising can include the participation of playwrights, directors, choreographers, and other types of leadership, people often use the word devising to distinguish their creative process from the conventionally playwright-led models of the twentieth century. A common misconception about devised work is that it is necessarily experimental or avant-garde. In reality, devised work can take a whole host of forms, ranging from experimental to realistic, and refers to the process of creation rather than product itself. Devising practice, especially in ensemble, can promote critical thinking, problem solving, social skills, listening, and creativity.