100 Saints You Should Know 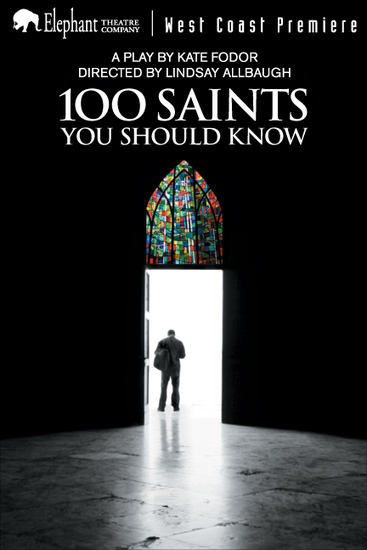 The much lauded Elephant Theatre Company, David Fofi and Lindsay Allbaugh, Co-Artistic Directors, will kick off their 15th Season on May 27 with the West Coast Premiere of 100 Saints You Should Know by Kate Fodor.

In this play we meet a priest who must reconcile his desires with his role in the church, a teenage boy confused about his own sexual identity, and a young woman desperate for spiritual validation. They are all brought together on one fateful night and discover the tenuous common ground they share.

Playwright Kate Fodor is a recipient of the Kennedy Center’s Roger L. Stevens Award, the Nation Theater Conference’s Barrie Stavis Award, and a Joseph Jefferson Citation. 100 Saints You Should Know was originally produced off-Broadway in 2007 at Playwrights Horizons.

Directed by Lindsay Allbaugh, this West Coast premiere opens May 27 and runs through June 26 at the Elephant Space.
With Brendan Farrell, Kate Huffman, Cheryl Huggins, Marco Naggar, and Pamela Roylance.

Please be advised that there is smoking onstage and photographic nudity.