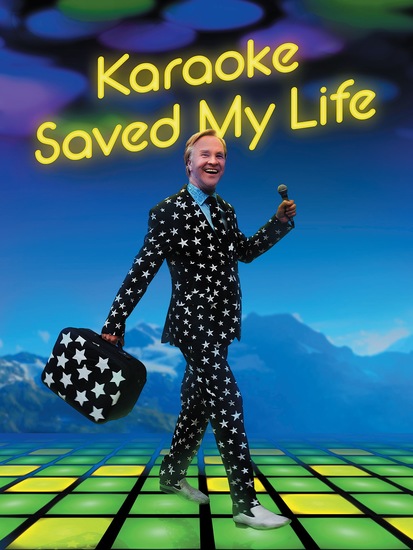 Scotty D, just a city boy, born and raised in south Detroit, takes you on a Journey, telling the tale of how karaoke saved his life and how it can save yours, too.

“Scotty D is a fascinating character and has some terrific stories. Our host ultimately convinces us of the communal power of music. It unites us. It celebrates us. Sometimes, it even saves us.”
Manhattan Digest

“Like a disco-themed Steve Martin, he generates smiles wherever he goes. For those who are itching to grab the mic and belt out a power ballad, you’ll have a great night”

Audience reactions:
“We howled with laughter, sang our hearts out and left with big smiles on our faces”

“A totally unique peek at life’s ups and downs, where the audience supplies the soundtrack”

“Witty and ironic, some people have magic and Scott has it”

Scott is an experienced immersive theatre practitioner and actor/writer who has performed with the legendary UK cult hit You Me Bum Bum Train, as well as nationally known British companies such as Actors Touring Company, Dante or Die, Shunt, Wildworks and Geraldine Pilgrim. He co-produced and co-starred in “The Promised Land” with Rhiannon Brace at Brighton Fringe Festival. He’s also a karaoke fan, and is a Hall of Famer at Karaoke Rumble in London.