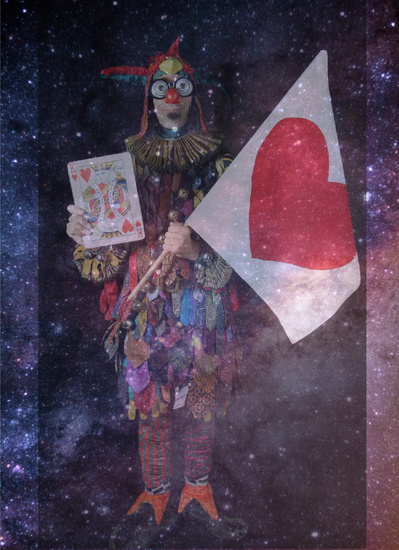 A worldly/otherworldly wild card takes you on an inner and outer journey, turning the world inside out and upside down. It’s been a long and winding storied road with a few bumps along the way. This fool without borders is a one of a kind multidimensional being whose life is just as much the performance.
We are strange creatures. Have to somehow channel into the Universe to make sense of it all. Does anyone really know what’s going on?
This show is a visual and aural extravaganza! It has some 60’s renaissance spirit. It is part standup comedy, part mixed up experimental cosmic trickster stuff with prop comedy, freestyle improvised foolery, playing with toys, juggling, fiddling with gadgets, musical nonsense, surprises and spring shoes etc.
He was the original ‘Fool on the Hill’ character in the Beatles/Cirque du Soleil ‘Love’ show for two years in Vegas at the Mirage Hotel & Casino.
Jolly has won awards at international performance festivals and is also an accomplished illustrator.
There will be artwork featured in the show.
Jolly Goodfellow aka Rumpel has traveled to 74 countries (been to every country on the map of Europe) and performed in 50.
Also traveled to 41 states in USA. Done multiple 24 to 53 hour shows in several countries in Europe.
Must be doing something right to help bring a smile
to the four corners of the globe ((( ♥️ )))
Originally from Australia, based in LA.
Been in numerous films, TV shows and music videos as a background actor.
Always open to new projects.
How far can you take entertainment or how far can entertainment take you?
The Show Must Go On!

Reviews:
‘The most maverick discovery of the month so far’
The Scotsman (Edinburgh Fringe Festival/Scotland)

director & performer of my own show