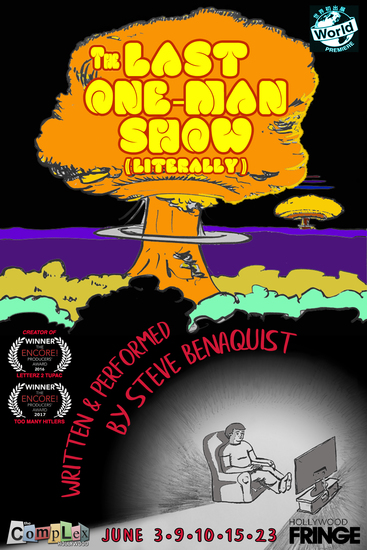 Here’s what people are saying:
“so much smart behind the funny”
“laugh-out-loud funny”
“remarkably fun”
-Richard Lucas

“exactly what I needed”
“I liked the toilet scene a lot … and who doesn’t love the mouse?”
-Nathaniel Beaver

From the writer and performer of “Tony Danza’s Letterz 2 2pac: an evening with Tony Danza” (winner Producers Encore Award, 2016) and “Too Many Hitlers” (winner Producers Encore Award, 2017), The Last One-Man Show (LITERALLY) is the story of a brilliant but underappreciated (ahem) comedian who is lucky enough to be in a well-stocked bomb shelter when the nukes finally, inevitably, start flying (first from NK, then USA, then Russia, France, UK, and Pakistan, because hey, why not? Turns out Paraguay also had them, but they only destroy themselves). Presumably the world outside is a dead and radioactive wasteland, so Goodman hunkers in the bunker. He is beginning to go stir crazy, but he is safe, and this place has videos and margarita mix for years to come. A gilded cage if ever there was one. He passes the time alternating between distracting himself from the horrific reality just outside his concrete walls with videos and fantasies, and the heavy weight he puts on himself as the last living human being to record and reflect on life. His only company is a parade of ludicrous characters who never made it past the blast, but inside Goodman’s memory, and on the 23 DVDs in the bunker. Reflecting on his antebellum goals and looking to the future, Goodman asks: can a comedian still make it, if the entire audience is dead?