Meanwhile, Back at the Super Lair 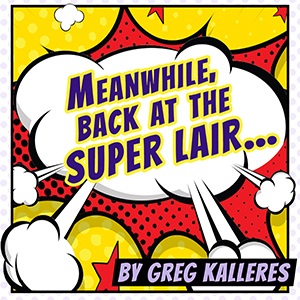 Award-winning theatre company The New American Theatre presents this comedy and the Los Angeles premiere by award-winning playwright Greg Kalleres (Honky). In “Meanwhile, Back at the Super Lair,”powerless crimefighters struggle with the meaning of life as they protect a city with no crime. The Human Fly, Silver Streak, Rhino Man and Leopard Woman share a city-funded apartment. But now they’re subjected to the investigations of a mayor-appointed efficiency expert, eviction… and brand new super-villain.

CAST
Some roles in Meanwhile, Back at the Super Lair… are double cast.
​Cast names are KAPOW! and BAM!

Produced by Jeannine Wisnosky Stehlin and
​The New American Theatre, a membership company of actors.

The New American Theatre is celebrating their 23rd season in Los Angeles in a brand-new space located in the Heart of Hollywood. The New American Theatre, a membership company (NAT) is a critically-acclaimed, award-winning theatre company dedicated to the production of world class theatre. The non-profit company has enjoyed critical acclaim, awards and nominations from the Los Angeles Times, New York Times, LA Drama Critics Circle, Back Stage, LA Weekly, LA Stage Alliance Ovations, and more. CBS Los Angeles named The New American Theatre as one of the top five 99-seat theatre companies in Los Angeles. NAT is committed to nurturing new and emerging artists who are on their journey through a long-lasting and fruitful career.