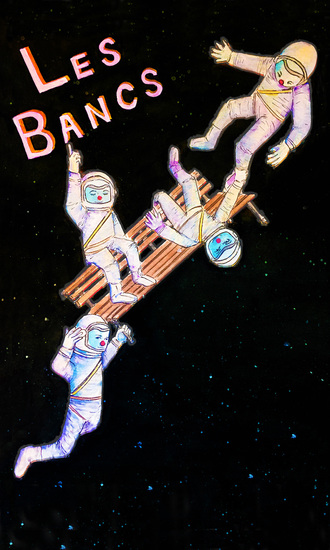 With our Earth on the brink of destruction, NASA has enlisted three clowns to travel the stars in search of a new world. But their journey is cut short when they are met by the conquering forces of our galaxy. Blasted and bruised from a menacing maelstrom of meteors, they find themselves trapped on Earth’s closest companion: The Moon. The conditions are harsh, the atmosphere is thin and they only have each other to survive. Will they band together to last in their lonely lunar landscape? Or will their tumultuous tensions propel them to blast each other into space dust? Find out from June 2nd to June 23rd as Les Bancs Clown Troupe makes their World Premiere at the Hollywood Fringe Festival.

Patrick Tabari (Tall Clown): Tabari has his BA in Communications from CSULB. This upcoming fall he will be attending the Lecoq School of Physical Theatre in Paris, France. Tabari is interested particularly in the more artistic side of physical theatre.

Jasmine Vang (Short Clown): Vang is currently working toward her BA in Theatre Performance at CSULB. She celebrates humanity through acting and clowning, working towards a presence of mind and generosity of the spirit.

Ryan Chiu (Medium Clown): Chiu is currently working toward his BA in Theatre Performance at CSULB. He intends on studying Popular Performance in England at Kent University next spring. He enjoys exploring the boundaries of theatre and the human experience.