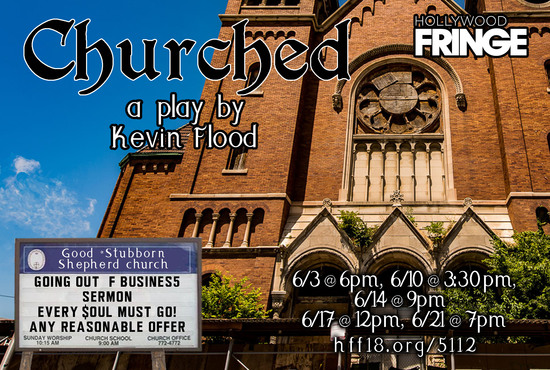 This June the 2018 Hollywood Fringe Festival will see the world premiere of CHURCHED, a half-hour existential comedy about the “going out of business, no soul left unsaved” sermon given by Vince Flynn, a not-ever-actually-anointed priest serving in a recently decommissioned Catholic church. While preaching mid-Mass, Vince spars with Kelli K. Bowden, the organist at the church (and town skating rink and baseball park), about what ministering has done to their beliefs, expectations, and formerly healthy relationship. At once highly comic and deeply moving, CHURCHED will play at the Broadwater Studio most Sundays and Thursdays in June. Specific dates and times are listed below.

Written by Kevin Flood, CHURCHED stars the author as Vince Flynn and Angelia Marie as a mute-by-choice organist who expresses both her resentment and longing through the organ music she improvises. Kevin is a filmmaker and actor who played Kalani on We’re Alive, the award-winning podcast set after the apocalypse. He has appeared in the series, Monk and films including, Backseat, A Country Christmas Story, Inside Scarlett, American Radio, Nerve and My Pure Joy. Angelia Marie is a musician, vocalist and songwriter (Gazz) with a rich background in theater, highlighted by a broad range of roles from comedy to tragedy (Natalya Stepnovna in Anton Chekhof’s “The Marriage Proposal,” and the title role in an award-winning production of Jean Anouilh’s “Antigone” by Jean Anouilh).