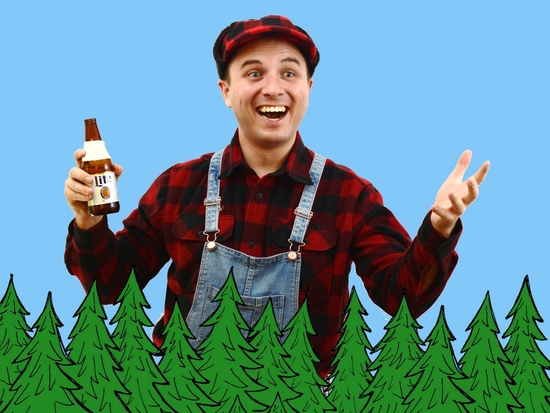 Don Waterski (pronounced: wah-TUR-ski) is an eccentric woodsman, and self-described forest expert, who takes the audience on a tour of the Northwoods. He teaches them about how trees actually reproduce, what to do when you come across a bear, and what the heck a hodag is (it’s a mythical beast that stalks the Northwoods, dontcha know?) The show is very interactive as Waterski continually asks the audience for help, but ultimately seems to only get more confused. Will you learn new insights into how to survive in the woods? Probably not. Will you have a good time anyway? You betcha!

While the humor of this show is extremely silly, the show is far from family-friendly. Trust me, you don’t want to explain to your children what really happens this far into the woods…

Director – Hunter M. Altman is a filmmaker and comedy person from New York who produces and hosts the weekly show GO SKETCH YOURSELF! at the Pack Theater. He is also the writer/star of the autobiographical sketch show “Tony the Wonder Llama: Half Man, Half Pee.”

Producer – Jany Stehman is a producer and house manager at the Pack Theater and performs in the house sketch team Very Famous.